Japanese architect Arata Isozaki has been named 2019 laureate of the Pritzker Prize, architecture's most prestigious award.

Isozaki is regarded as Japan's most influential postwar architect. He is the 46th recipient of the Pritzker Prize, and the eighth Japanese architect to receive the honour.

The Pritzker jury describes him as "a versatile, influential, and truly international architect".

"Possessing a profound knowledge of architectural history and theory, and embracing the avant-garde, he never merely replicated the status quo but challenged it," reads the jury citation.

A highly decorated architect, city planner and theorist, Isozaki won the RIBA Gold Medal for architecture in 1986 and was awarded the Leone d'Oro at the Venice Architectural Biennale 1996.

His career spans more than six decades and his portfolio features over a hundred buildings spread over Asia, Europe, North America, the Middle East and Australia. His first international experience, however, was one of war and destruction on the scale of entire cities.

Born in 1931 in Ōita on Kyushu, Japan's third largest island, Isozaki was just 14 years old when nuclear bombs were dropped on Hiroshima and Nagasaki.

"When I was old enough to begin an understanding of the world, my hometown was burned down," said Isozaki.

"Across the shore, the atomic bomb was dropped on Hiroshima, so I grew up near ground zero. It was in complete ruins, and there was no architecture, no buildings and not even a city. Only barracks and shelters surrounded me.

Japan's recovery from war defined the beginnings of Isozaki's architecture career. He graduated in 1954 from the University of Tokyo and studied under Kenzo Tange, the 1987 Pritzker Prize laureate.

His 1962 conceptual project, City in the Air (Joint Core System), imagined a new layout for Tokyo where rapid urban expansion would be facilitated by multi-layered buildings over the city's existing layout and waterways.

In 1963 he founded Arata Isozaki & Associates, as the Allied occupation ended and the rebuilding process began in earnest.

Notable early works include the Ōita Prefectural Library (1966), Expo '70 Festival Plaza in Osaka (1970), Museum of Modern Art, Gunma, and Kitakyushu Municipal Museum of Art in Fukuoka (both 1974). Several of his works from this era are considered definitive examples of Japanese brutalism.

"In order to find the most appropriate way to solve these problems, I could not dwell upon a single style. Change became constant," Isozaki explained. "Paradoxically, this came to be my own style." 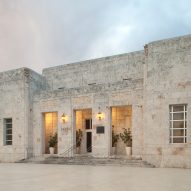 In the 1980s, Isozaki took his mutable architecture style to an international audience with his first major overseas commission, the Museum of Contemporary Art in Los Angeles (1986).

Isozaki's avant-garde style is well known for being tailored to the context of its site.

His Palau Sant Jordi in Barcelona, built for the 1992 Summer Olympic, was designed to sit low to the ground against the Montjuïc hillside and finished in local materials such as zinc, tile and travertine. Its domed roof used Catalan vault techniques to form a sloping profile reminiscent of Buddhist temples.

"Isozaki is a pioneer in understanding that the need for architecture is both global and local — that those two forces are part of a single challenge," said Stephen Breyer, Pritzker Prize jury chair.

"For many years, he has been trying to make certain that areas of the world that have long traditions in architecture are not limited to that tradition, but help spread those traditions while simultaneously learning from the rest of the world."

Set up in 1979, the Pritzker Prize is modelled on the Nobel Prize, annually honouring the work of a living architect.

Scroll down for the full citation from the Pritzker Prize jury:

Arata Isozaki, born in Ōita, Island of Kyushu, Japan is known as a versatile, influential, and truly international architect. Setting up his own practice in the 1960s Isozaki became the first Japanese architect to forge a deep and long-lasting relationship between East and West. Possessing a profound knowledge of architectural history and theory, and embracing the avant-garde, he never merely replicated the status quo but challenged it. And in his search for meaningful architecture, he created buildings of great quality that to this day defy categorisations, reflect his constant evolution, and are always fresh in their approach.
Over the more than 50 years Arata Isozaki has been practicing, he has had an impact on world architecture, through his works, writings, exhibitions, the organiszation of important conferences and participation on competition juries. He has supported many young architects from across the globe to have a chance to realise their potential. In such endeavours as the Fukuoka Nexus World Housing project (1988-1991) or Toyama Prefecture's Machi-no-Kao (“face of the city”) program (1991-1999) he invited young international architects to develop catalytic projects in Japan.
Isozaki's oeuvre has been described as heterogeneous and encompasses descriptions from vernacular to high tech. What is patently clear is that he has not been following trends but forging his own path. An early exploration of a new vision for the city is seen in the project City in the Air, from the early 1960s, for a multilayered city which hovers over the traditional city. His first works in his home country of Japan include a masterpiece of Japanese Brutalism, the Ōita Prefectural Library (1966). Such projects as the Kitakyushu Central Library (1974) and the Gunma Prefectural Museum of Modern Art, opened in 1974, reveal an exploration of a more personal architecture. In the museum, the clear geometry of the cube reflects his fascination with void and grid as it seeks to attain an equilibrium in which to display changing works of art.
Arata Isozaki's reach and repertoire have expanded over the years to include projects of many scales and typologies and in numerous countries. In the United States, Isozaki is probably most well-known for undertaking the Museum of Contemporary Art in Los Angeles (1986) and the Team Disney building in Florida (1991). The first is a study of the vault or what he calls “rhetoric of the cylinder” and the second is evidenced by a more playful use of shapes with a postmodern flair.
Many know his work through such significant buildings as the Sant Jordi Stadium for the 1992 Olympics in Barcelona. He has undertaken exemplary works in China such as the CAFA (China Central Academy of Fine Arts) Art Museum in Beijing opened in 2008 or the Shenzhen Cultural Center (2007) in Shenzhen, Guangdong.
Isozaki has shown extraordinary dynamism in recent years with such works as Qatar Convention Center (2011), the traveling inflatable Ark Nova (2013) designed with Anish Kapoor for regions in Japan affected by the 2011 tsunami, and the powerful yet elegant Allianz Tower in Milan, opened in 2018. Once again, it is a testimony to his ability to understand the context in all its complexity and to create a remarkable, well-crafted and inspiring building that is successful from city scale to the interior spaces.
Clearly, he is one of the most influential figures in contemporary world architecture on a constant search, not afraid to change and try new ideas. His architecture rests on profound understanding, not only of architecture but also of philosophy, history, theory and culture. He has brought together East and West, not through mimicry or as a collage, but through the forging of new paths. He has set an example of generosity as he supports other architects and encourages them in competitions or through collaborative works. For all these reasons, the Pritzker Architecture Prize Jury has selected Arata Isozaki the 2019 Laureate.
Read more: