Adidas, BMW, Netflix and Lego are among brands whose logos have been given a Bauhaus-inspired makeover in a graphic design project by creative platform 99designs.

In celebration of the Bauhaus centenary this year, the Australian freelancer platform asked graphic designers on its books to reimagine the world's biggest brand logos.

Each design has been produced in the style of the German design school, characterised by its minimalist approach and use of primary colours.

"As early evangelists of minimalism, Bauhaus artists and designers ascribed to a 'less is more' aesthetic, adopting a go-to palette of primary colours and reducing imagery down to its bare essentials," said 99designs.

"They tore up the rule book when it came to typography – they were among the first to set type vertically and diagonally – and following hot on the heels of cubism, incorporated an unbridled enthusiasm for geometry in their work," explained the platform.

Each of the resulting 16 logos has been designed by a member of 99designs' online platform.

For example, the Apple logo is reimagined as a spherical, shaded apple with a concave "bite", which is accompanied by a simple sans-serif font.

The BBC logo was reinterpreted as a series of geometric shapes, such as semi-circles and triangles, spelling out the broadcaster's initials. It has a simple colour scheme of red, yellow and purple.

For the Adidas logo, the brand's existing lettering was placed closer together and the monochrome colouring has been changed to turquoise, red and cream. The sportswear brand's iconic three stripes were interpreted as rounded shapes.

Lego's logo appears as a series of building blocks in a blue, red and yellow colour scheme.

Ferrari's iconic stallion was recreated using red and black geometric shapes, while the design for Netflix features a lower case red "N" and the streaming service's name in a rounded font. 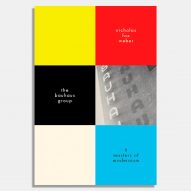 "This project really demonstrates the long-lasting global impact that Bauhaus has had on artists all over the world," said Patrick Llewellyn, CEO of 99designs.

"The work featured has been created by designers in more than ten countries from Argentina, Guatemala and the US, to Russia,  Latvia and the UK."

"It's easy to draw parallels with people's anxiety around things like automation and artificial intelligence today, but it's inspiring to see how technology can bring together a global community of creative talent and demonstrate how the timeless principles of Bauhaus design still resonate today,"  he explained.

The Bauhaus is the most influential art and design school in history. To mark the centenary of the school's founding, Dezeen has put together a series of articles exploring the school's key figures and projects.