The building – officially called the Richard A and Susan F Smith Campus Center – is located on a prime spot within the university's campus in Cambridge, Massachusetts.

The renovation is "a radical re-appraisal" of the Holyoke Center, which opened in 1966 and was renamed in 2013.

The original building – Harvard's first high-rise – was conceived by Josep Lluís Sert, who served as dean of Harvard's Graduate School of Design from 1953 to 1969 and received the AIA Gold Medal in 1981.

Often referred to as brutalist in style, the facility is composed of concrete and glass. At the time of its completion, the building received criticism for being too large and out of place.

The building's interior layout was modified over the years. The most recent overhaul was designed by London-based Hopkins Architects in collaboration with local studio Bruner/Cott Architects. New York's Michael Van Valkenburgh Associates served as the landscape architect.

Encompassing over 360,000 square feet (27,870 square metres), the colossal building houses eateries, shops, event space, offices and areas for socialising and studying. Intended to act as a front door to Harvard, the refurbished facility serves both the university community and the greater public.

"It is part of a wider, ongoing 'Common Spaces' initiative by the university to ensure its physical spaces foster the campus's intellectual, cultural and social experience and support the wider community," the team said in a project description.

The goal of the renovation was to open up parts of the building and create more communal areas. The architects sought to respond to Sert's design "in a manner that is bold, transformative and dynamic – but which, with each intervention, is grounded in and sympathetic to the history and design of the building", said Andy Barnett, a senior partner at Hopkins Architects. 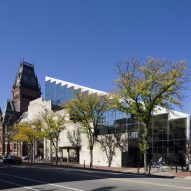 On the exterior, the team repaired the facades and added more glass to the lower portion of the building. Within the facility, the ground, second and 1oth floors were completely reconfigured. Levels three through nine, which contain offices, were not modified.

On the north and east sides of the building, the team created two glazed pavilions, which are meant to increase "transparency and connectivity between the interior and the surrounding urban realm".

An existing arcade, which runs through the centre of the ground floor, is lined with food vendors and seating. The team removed concrete screens but retained the corridor's original columns and waffle-slab ceiling. Bridges made of glass and steel traverse the space.

Situated just off the arcade is a large, skylit zone called Harvard Commons. The triple-height space is ringed by partial floors and features a range of seating options. Ceilings are covered with wooden slats to help dampen noise and add visual warmth.

Plantings were incorporated throughout the facility, both inside and out. Gardens with trees, bushes and ferns are visible through floor-to-ceiling glass. Lobbies flanking both ends of the arcade feature verdant living walls, which are irrigated using rainwater collected on the centre's rooftop.

The second floor encompasses collaboration and meeting rooms, along with quiet study areas fitted with couches, tables and fireplaces. A new outdoor terrace has wooden decking and lush greenery.

The 10th floor offers both formal and informal gathering spaces. Visitors are afforded sweeping views of the campus and surrounding urban landscape, including the Charles River.

Other recent projects at Harvard University include the ultra-efficient HouseZero, which entailed the overhaul of a pre-1940s home occupied by the Harvard Center for Green Buildings and Cities. The project was designed by Snøhetta, Skanska and university researchers.

Last summer, it was announced that architecture firms Herzog & de Meuron and Beyer Blinder Belle will oversee the renovation and expansion of Gund Hall, home to the Harvard's Graduate School of Design. The project will entail subtle modifications to the brutalist building, which was designed by architect John Andrews and completed in 1972.