Boston architect Eric Höweler and a team from Harvard's Graduate School of Design have helped local doctors develop patient isolation hoods – a new type of device that could save the lives of healthcare workers and "impact things worldwide" in the fight against coronavirus.

Made from a single sheet of folded plastic, the patient isolation hood has been developed from a standing start in just nine days and will be trialled at Massachusetts General Hospital from Tuesday.

The transparent, dome-like patient isolation hood (PIH) fits over a patient's head and shoulders, protecting hospital staff from virions, or virus particles, that are breathed or coughed out by people with coronavirus.

"The patient isolation hood is somewhere between a wearable and an architectural scale," Höweler told Dezeen. "It's like a small house that is placed over a patient's body during a risky procedure."

Doctors are particularly at risk during intubation, a procedure that involves inserting a tube into the airway in preparation for ventilation.

"If the patient is coughing, there can be a lot of aerosolized droplets that are spread, making the procedure risky," he added. A clear plastic shield around the patient can help control those aeroslized droplets."

The hood has been developed at breakneck speed by a group of doctors, engineers and designers meeting in a series of Zoom calls and Slack discussions. The team included Höweler, who is an asssociate professor at the Harvard Graduate School of Design, and Harvard faculty and researchers in the GSD FabLab.

"This is an open-source call that brings together designers from all over the world and is being prototyped in an extremely accelerated timeframe," said Höweler, who is also a partner at Boston architect Höweler + Yoon Architecture.

"The speed and level of collaboration is unprecedented," he added. "About nine days before a first review at the hospital and hopefully 14 days for deployment. "

"This project sprung out of the previous efforts with PPE," added Höweler, who has helped develop open-source face shields for healthcare workers. 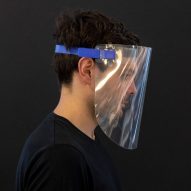 "We were wondering what else we could do, and the individual efforts of thousands of makers 3D-printing masks seemed to be overtaken by the onlining of companies with much larger volume capacities."

"We heard about intubation boxes or patient isolation hoods also being in high demand," he added. "The idea is to partially enclose a patient while a doctor performs an intubation procedure, which is to put a tube down the patient's throat."

"We sketched up some templates for a CNC and asked a plastics fabricator that we'd worked with before to cut and assemble a prototype," Höweler explained.

"We then asked around to see if there were local hospitals that were in need."

"We felt strongly that there was some opportunity to better look at protecting physicians," Smith told Dezeen.

"In some countries, like in areas of Spain, it was one in eight getting infected while working with Covid patients."

Dr Wong, a physician at the hospital, came up with the idea of making lightweight hoods that could be placed over patients.

"I just said, hey, this is fantastic because it basically covers the patient who is breathing out all this, you know, aerosolized virus," Smith said. "And he makes a couple little slits in the back, puts his hands through, and he can do all the things he needs to do with better protection."

Engineers developed a prototype but "there was nobody on the design side, giving input to this, not even on the ergonomics," said Smith.

Smith made contact with Höweler via the innovation team's Slack channel, and the collaboration began.

Höweler and his team "immediately then started to have the input that I needed," Smith said.

"The success of this will be because the design is exceptional," Smith added. "Not only because it is simpler than we imagined, but is also more functional as a result."

The design "certainly could impact things worldwide" in the fight against coronavirus, Smith said, saving the lives of both healthcare professionals and patients, since the negative pressure inside the hood reduces the need to put patients on ventilators.

"We've actually started to find that you can get by without putting breathing tubes and putting them on a ventilator, and you're probably gonna cause less lung injury because of it," Smith said. "People may do better."