EWE, which the trio set up to revive traditional Mexican techniques and materials, teamed with local craftsman to hand-make tables, a chair, a stool and a lamp using wood, marble and stone indigenous to Mexico.

The process follows that of EWE's previous work – which includes handmade marble, stone and bronze homeware and furniture pieces.

"Sincretismo subtly draws upon ancient wisdom, rituals, forms and materials of pre-hispanic cultures, which infuse EWE's works with a richness," said EWE in a project description.

"The objects within the collection are simultaneously functional and sculptural," the team added. "Their unique shapes and forms are created by the hands of artisans and their careful carving of the natural materials."

Featured in Sincretismo is the Partera chair, which comprises a long bent seat, set on pair of legs, and a tall backrest based on the shape of a birthing chair commonly used in Mexico.

Each element is carved with a chisel and a chainsaw from Parota wood to leave rough indents across its surface. The studio then burnt the wood black. "The result is simple yet dramatic," said EWE. 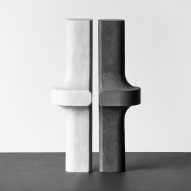 The blackened surfaces of Partera follows a trend for dark furniture and homeware that surfaced at last year's Design Week Mexico, which included a number of works by EWE.

Similarly, the Partera stool comes in three different materials: pale Jalapa travertine, black Monterrey marble and oak wood, which is also charred black. The stool is a the same shape as the chair but stripped of its tall back.

Sincretismo also includes the Copal side table that EWE has cut in four materials – volcanic glass obsidian, Tikal green marble, volcanic stone and wood – with the help of stonemasons and wood carvers.

"The artisans understand the nature of the materials, working to bring out their unique characteristics and particular properties," said EWE.

"Surfaces were kept uncluttered by detail in order to expose the material itself," the team added. "The smoothness and silky texture of the pieces is achieved by the artisans' practice of polishing the surface."

Each Copal side table comprises four funnel-shaped chunks of the material. Three form the top and appear slotted on top of an upturned version that forms the base, with the entire structure held together by "hidden locks".

"Copal side tables are composed by four identical pieces linked together with hidden locks, making the observer feel like three out of the four parts of the table are just touching and hovering in the air," said EWE.

A similarly disguised system is used to hold together the larger Copal table. This is made up of three large half-spheres cut from the Green Tikal marble – which is quarried in Guatemala – that are then set on atop a set of smaller half-spheres.

"The technical complexity of the work is related to its stability, as the upper big spheres are seemingly hovering in the air, resulting in a magnificent visual tension that defies gravity on its cantilever," said the studio.

Finishing off the series is the standing Estela Lighting fixtures. A hollowed triangular chunk of Monterrey marble forms the lamp, with the light illuminating the interiors to showcase the roughness of the hand-carving. 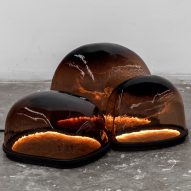 EWE launched the limited-edition Sincretismo collection at the Zona Maco art fair, which was held in Mexico City from 6 to 10 February 2019.

The fair takes place in the city every February and September, and is among a number of initiatives propelling Mexico's emerging design scene. Others include the annual Design Week Mexico and Mexican Open of Design (AMD), which run concurrently in October.

The Masa Crítica exhibit that EWE Studio held in an abandoned coin factory during AMD was among the highlights of the 2018 event.

The studio also recently teamed up with art curator Cristobal Riestra and designer Brian Thoreen to set up Masa design gallery, with the aim to champion the work of country's contemporary design scene. Masa hosted its first exhibit in an old mansion last month.