The Celeste is an electric, votive light that features illuminated electric tubes in place of wax candles. These slot into openings in the table, forming a circle.

"I think it's a pity that the electric candlestick holders on the market light up when you put a coin or press a button," said the designer. In her design, each tube lights up when picked up and placed into the table.

The lights then slowly decrease in brightness until they eventually go off, just like ordinary flames. "This means you can maintain the gesture [of lighting the candle] and the relation you have with the object," she added.

According to Daguet, the frosted plexiglass gives the light a soft glow, as well as a "ghostly" appearance.

The French designer began designing the Celeste light stand after discovering that many churches were switching from traditional to electric candles due to the black smoke emitted by the burning flames, which mark the walls and ceilings.

In addition to this, the wax is difficult to clean and the candles have to regularly be replaced, she explained.

Daguet wanted to offer a product that would solve this issue, while still retaining the symbolic meaning and ritual aspect of the votive candle.

"For a few years now, places of worship have gradually started to abandon their candles, because the soot they release has damaged the walls, making paintings and stained glass windows disappear under a black veil," Daguet explained.

"I thought it was a real pity to lose the beautiful symbols of the candles and the fire, but, speaking with people who take care of the churches, I understood that this change was justified."

"I wanted to bring back the gesture and poetry of this ancient ritual in a contemporary object," she added.

Daguet wanted the design of the votive light stand to be both new and recognisable. She chose a circular shape for the table to represent the Christian symbol of homogeneity and unity.

The leg is designed to look like a column, to represent a universal church symbol for the connection between the "profane and the sacred world". 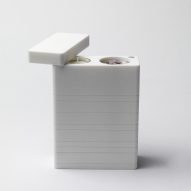 The stand is made from steel, with a stone weight built inside for stability. The cylindrical leg has been cut in half through the centre and opened up to make the table lighter, and to let light through.

"The gestures were, for me, one of the most important aspects," said the designer. "Most of the electric votive light stands on the market removed this interaction. You simply need to press a button or put a coin to light a fixed candle."

"I wanted to keep the tactile relationship between the believer and the object," she continued. "So they can take a candle in the middle, hold it in their hands while they pray and place it somewhere in the circle."

British designer Sebastian Bergne also created a modern take on a traditional ritual object. His Digital Shabbat is a travel-friendly set of objects to be used in Shabbat rituals, including a digitally printed bread cloth and portable glass candle holders.

Photography is by Julien Deceroi.