London-based Studio Furthermore's Moon Rock collection is made from aluminium but designed to look like it is formed from materials mined in outer space.

Each of the metal Moon Rock objects features a unique pattern of holes that is unrepeatable, making every piece a one-off. The collection includes tables of various sizes as well as stools and lighting.

The studio describes the material as a rock from the moon that has been carved by hand to reveal formations of a "metal-rich lunar mineral ore" that has been brought back to earth thanks to the expansion of space travel in an imagined near future.

Some of the edges are left "raw" while others are shaped into curved surfaces or cut into straight lines. Thin slabs of the material provide flat surfaces for seating and tabletops.

"We're projecting ourselves maybe five or 10 years into the future when it becomes possible to source material from the moon and from other places," studio co-founder Iain Howlett told Dezeen. "We're imagining how designers will start to work with these new materials."

The speculative project is a response to the current focus on material scarcity after a century of abundance.

"We're also thinking about the shift in culture," said Howlett. "That we go from having to be very careful about material use at the moment and [feeling] quite pessimistic, to a future that we could be optimistic about, if we make the right decisions now."

The objects are made from aluminium with an effect that echoes the "lost foam" casting process developed by Studio Furthermore for previous ceramics projects. Examples include the Tektites collection made from porcelain injected into sponge and foam to make homeware patterned with holes. 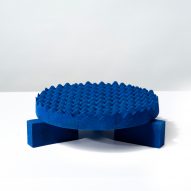 The Moon Rock furniture was at this year's Collectible design fair in Brussels, where young designers were strongly represented with their own booths as well as by galleries and in special projects organised by the fair's founders.

Studio Furthermore, founded by Howlett and Marina Dragomivra in 2015, aims to combine traditional craft manufacturing with research into new technologies and science.

"Our work is really about the line between design and art," said Dragomivra to Dezeen.

At a talk hosted by Dezeen during Dutch Design Week last year, speakers called on designers to use "more science fiction" to imagine ambitious solutions to the world's problems.

"At first you have to think about the rockets to Mars before you can apply them here," said designer Jalila Essaïde. "It's a dream, an escape, but maybe you find aspects you can use here [on earth]."