Lighting designer Bernhard Dessecker describes how he referenced the appearance of BMW headlights to create his Iconic Eyes lamp for Moooi in this movie Dezeen produced for the Dutch brand.

Munich-born Dessecker, who splits his time between his hometown and New England, studied interior architecture before entering the field of lighting design.

"What I love about lighting design is that it is never predictable," he says in the movie, which Dezeen filmed for Moooi at Dessecker's home studio in Munich.

"The quality of the light at the outcome is something that you can't predict when you start working on an idea or start sketching."

Iconic Eyes, Dessecker's first design for Moooi, is an egg-shaped chandelier that comes in two sizes.

The fixture is covered with eye-like lenses of frosted glass set inside chrome rings, individually lit by LED lights.

Dessecker initially designed the light as a bespoke solution for the foyer of Munich's Bavarian National Museum, which was being renovated at the time.

"I was approached by the Bavarian National Museum because they needed some new lighting," he said.

"At the same time, I was approached by BMW to see if I was interested in creating a light object made with pieces of BMW headlights."

Dessecker designed the chandelier by experimenting with headlight pieces sent to him by BMW, which is also based in Munich.

"I got a huge box from BMW with all sorts of headlight parts, and tried to figure out which ones would be suitable for a lamp," he said. "It was almost like a puzzle, putting them together in a new way."

The prototypes were eventually installed in the foyer of the museum as a one-off, but Dessecker wanted the design to have a longer life in production.

"Eventually I decided to approach Marcel Wanders and send him photographs of the prototype, and asked if Moooi would be interested in producing it as a serial product," he said. Shortly afterwards, he received a positive reply.

"The collaboration with Moooi was really very exciting for me, I didn't have to make any compromises," Decker said. 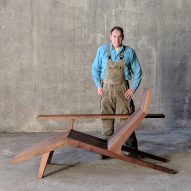 Design should be "smashed into the world" says Joep van Lieshout

"That's one of the reasons that I wanted to work with Moooi, because I knew that Marcel would be adventurous enough to do something like this. It's great to see something really being exactly as you imagined it."

Iconic Eyes was launched at an event at the Bavarian National Museum in March 2019, where 11 of the lights have been installed permanently. It will be displayed at Moooi's space during Milan Design Week at Mediateca Santa Teresa, Via Della Moscova 28, Brera, Milan.

This movie was filmed in Munich for Moooi. It is part of an ongoing collaboration between Dezeen and Moooi called Design Dreams exploring how successful designers turned their dreams into reality.