Designer Brodie Neill has created a contemporary hourglass filled with microplastic instead of sand to highlight the issue of ocean plastic pollution.

The Capsule hourglass, which is filled with microplastic collected by Neill from beaches in Tasmania where he grew up, is an open-edition piece.

"The hourglass seeks to draw attention to the scale of the problem of plastic pollution," Neill told Dezeen. "I work with a global network of NGOs, environmental agencies and beach combers who work diligently to clean up our beaches. Each individual hourglass will hold plastic collected from these partnering sites."

Neill said that for future editions, a collector will be able to specify the location from which they would like the plastic the hourglass contains to be gathered.

This location will then be marked on a map etched on the silver cap, on the top and base of the hourglass. One cap depicts the northern hemisphere and the other the southern.

By marking the location, the work is "thereby geographically rooting the hourglass to a time and place while also recognising that we are affected by plastic waste in all corners of the world," said Neill.

"With Capsule, I want to draw attention to the limited time we have to save our planet. And if we're not careful our beaches and coastlines will be lined with microplastic, the future sand," he continued.

The hourglass will be premiered during Milan Design Week as part of an exhibition curated by Milanese design gallerist Rossana Orlandi titled Ro Plastic-Master's Pieces.

The exhibition at the city's Railway Pavilion of the Museo Scienza e Tecnologia Leonardo da Vinci will showcase 30 one-of-a-kind pieces in recycled plastic made by world-renowned artists, designers and architects.

It follows on from Orlandi's "guiltless plastic" initiative, which was launched during last year's Milan Design Week with a series of talks.

The project is aimed at changing the perception of plastic and ensuring the material is used responsibly. "It's a sort of mission," Orlandi told Dezeen last year. "I want to change the meaning of plastic. I want to make plastic guiltless."

"My ocean plastic series of works have all sought to re-contextualise and repurpose ocean plastic from waste into a valuable material resource which can be used to create functional, yet beautiful, design objects," said Neill. 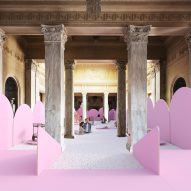 The designer has been working with ocean plastic since 2016 when he launched the Gyro table – a circular table featuring a top made from inlaid fragments of recycled ocean plastic.

The following year, he launched a whole series of furniture made using the recycled ocean plastic material, which he named Ocean Terrazzo.

Developed by Neill, Ocean Terrazzo is made in the same way as regular terrazzo, but instead of using chips of marble or granite, Neill set hundreds of tiny pieces of plastic into a resin surface.

The 2017 furniture collection, named Flotsam, included a white bench with an ocean-plastic surface. This year at Ro Plastic-Master's Pieces, in addition to the Capsule hourglass, Neill will premier a new black edition of his Flotsam bench.

"The bench elevates microplastic to a jewel-like quality through a heightened contrast between the black base and the half-million multicoloured plastic fragments," he explained.

"The name of the bench, Flotsam, references the floating nature of the plastic waste which travels across the ocean surface, breaking down into smaller and smaller fragments with the relentless currents and exposure to sunlight."

It will take place at between the 6 and 14 April at Railway Pavilion of the Museo Scienza e Tecnologia Leonardo da Vinci during Milan Design Week.

Also at Milan Design Week this year, Beatrice Bonzanigo will present a mobile off-grid micro home, Tom Dixon will open a permanent restaurant and showroom called The Manzoni, and Nicola Golfari will debut a series of household objects that make everyday tasks easier for people with disabilities.