Humanscale's installation at Milan design week mimics the movements of its visitors, explains designer Todd Bracher in this movie filmed by Dezeen for the workplace ergonomics brand.

New York-based Bracher has created an interactive light sculpture for the manufacturer of ergonomic workplace products, in collaboration with digital designers Studio The Green Eyl.

Titled Bodies in Motion, the installation aims to capture the feeling of human movement.

"We wanted to remove any cosmetic distractions from watching someone move and instead capture the essence of human movement in its most essential form," he continued.

The installation, which is situated in the warehouse of Ventura Centrale in Milan, features a minimal representation of the human body formed of lights that respond to the movements of visitors.

As visitor's bodies are scanned by camera sensors, 15 motorised lights project tightly-focussed white beams onto a screen fifteen metres away. The points of light on the screen correspond to key points of the subject's body including the head, shoulders, elbows, hands, sternum, hips, knees or feet.

"As you move your body you can move these lights across the space and what they do is they manifest as 15 points on a screen which resemble your body," Todd explained.

Richard The, co-founder of Studio The Green Eyl, created the interactive and graphic design behind the installation.

"We developed custom software that scans your body in real time, in motion with a state-of-the-art depth camera. This system controls 15 motorised moving lights that react to your motion," he explained.

The installation was influenced by the research of Swedish scientist Gunnar Johansson, who investigated motion perception in the 1970s. 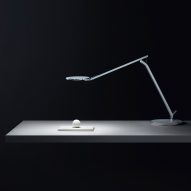 Founded in 1983 by Bob King, Humanscale produces ergonomic products for the workspace such as seating, desks, lighting and workstation accessories designed to improve the overall health and wellbeing of workers with different needs.

"Having a deep understanding of the human body and movement allows us to design products that remain relevant over time, and will work for different people in different places all over the world," King told Dezeen.

King emphasised that Humanscale wanted to exhibit an installation that communicated the core of the brand's belief system rather than presenting a collection of their products.

"We think it's really cool to come to Milan, the most important design event in the world, and talk about the things that matter most to us," he said. "Not products but humans and human movement in particular because that is at the core of what we do and what we believe in."

The exhibition is open to the public at Ventura Centrale in Milan until 14 April.