David Rockwell has created "a rough and ready kit of parts" for the set of the first concert at New York cultural venue The Shed.

The New York architect, who collaborated on The Shed with lead architect Diller Scofidio + Renfro, was enlisted to create the stage for a five-day music concert held at the venue.

Rockwell teamed with designer Adam Stockhausen to create a flexible setting for Soundtrack of America – a showcase that aims to celebrate the impact of African American culture on contemporary music with different performers featured each night.

"The concept was to create something that was simple, democratic, and welcoming, and that could be adjusted to fit the needs of a wide variety of performers," Rockwell told Dezeen.

The duo has designed a plywood structure that appears like a huge box inserted into the far end of The McCourt – a plaza that can be temporarily covered by The Shed's moving roof.

Various components are included in the structure, such as a small platform that protrudes out from the front, and sliding doors that open to reveal a larger stage for a band behind.

"The boxes contain sliding doors and platforms that can be adjusted for different performers, making it a rough and ready kit of parts," said Rockwell.

"Its simplicity is designed to keep the focus squarely on the musicians, without distractions."

Animation details the simple construction of the huge plywood set

In the current arrangement, The Shed's huge telescoping roof extended to cover for the concert. The area can also act as an outdoor plaza when the roof is rolled back to nest over the main building. 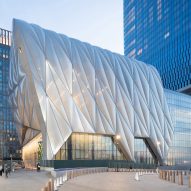 The Shed opens at Hudson Yards with huge "telescoping" roof

Rockwell's team has also added a "cascading topography" of temporary plywood seating in the venue's standing area, which is otherwise left empty.  Additional seating is located in the upper level housed inside The Shed. Bi-folding glass doors front the space so that it can be opened up to The McCourt.

The flexible Soundtrack of America set follows the principle for The Shed, as conceived by New York firm Diller Scofidio + Renfro. It is designed to be easily set-up and taken down, suiting the venue's changing form.

"The flexibility of the Soundtrack of America stage is in direct dialogue with the space itself, for which our concept was always to push structural flexibility to the absolute limit in order to satisfy the widest possible range of creative impulses, needs, and desires," Rockwell told Dezeen.

The Shed opened on 5 April to round out the first phase of the major Hudson Yards development. The eight-storey building faces Thomas Heatherwick's massive Vessel structure and nestles into a neighbouring skyscraper, 15 Hudson Yards, also designed by DSR and Rockwell.

Other projects here include a tall office building by Foster + Partners and SOM's residential skyscraper, which will accommodate the first hotel by luxury gym Equinox.

Photography is by Iwan Baan, courtesy of The Shed.