Deep red walls and dark furnishings are some of the features that interior design studio Sivak & Partners used to create a cosy atmosphere inside this cafe in Ukraine.

Located to the south of the country in the port city of Odessa, the Daily cafe has been designed by Sivak & Partners to be a versatile yet intimate space where locals could stop by for a variety of occasions.

"Here you can enjoy some quiet time with a book and a cup of coffee, spend some time in the company of friends, or share a little table for two on a date," said the studio, which is headed up by architect Dmitriy Sivak.

"This place almost has the atmosphere of an arthouse movie – from every perspective you get the sense of a scene where people are casually interacting with each other."

The 76-square-metre space previously played host to a cheese shop, so the studio began by completely gutting the interiors to make the layout more suitable for a cafe.

It is now divided into two zones – a main service area and a more relaxed sitting room.

The walls of the former space have been roughly covered with a warm, sand-coloured plaster.

"We worked with our contractor for three weeks to try and find a suitable shade [of plaster] and guess how it would look in the light of the sun since all [the construction work] happened in the late autumn during overcast weather," Maksym Iuriichuk, chief designer at the studio, explained to Dezeen.

Fixtures like the grooved bar counter and dining tables have been crafted from ash wood. This has also been used to make the central high table, above which a greenery-filled planter is suspended. 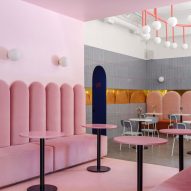 Although the majority of furnishings, such as the stools and seating banquettes, have been made bespoke for the cafe, other pieces have been sourced from minimalist Danish design brands.

The pendant lamps hanging above the window seats are from Ferm Living, while the spherical wall lights are by &tradition.

An arched doorway leads through to the sitting room at the cafe's rear, where the plaster walls have been completed in a much deeper shade of blood-red.

The darker mood of the room is enhanced by black chairs by Hay and black blinds which have been hung in front of the windows.

A panel of fluted glass that stands at the centre of the room offers a loose sense of separation to groups sat on the jade green sofa that lies immediately behind.

Monochromatic patterned tiles much like the ones applied on the floors in the cafe's main room have been used in the customer bathroom, but instead feature large geometric shapes.

As well as the Daily cafe, the city of Odessa has recently seen the opening of Breadway – a bakery designed by Lera Brumina and Artem Trigubchak to feature a bold mix of cobalt blue fixtures and bubblegum-pink seating.

Photography is by Antony Garets.