A plant-filled courtyard and a long swimming pool feature behind the board-marked concrete walls of this residence in La Plata, Argentina, designed by local architect Felipe Gonzalez Arzac.

From the street, the residence has a severe exterior comprised of concrete walls textured by the imprints of wooden boards. This result is known as board-marked concrete.

Inside, the 190-square-metre home opens up around a central courtyard. Glazing wraps the yard offering views of the greenery and plenty of natural light.

"Its totally blind facade and its open sides give a particular visual impact, generating the sensation of being a completely dark house inside, without much connection with the outside," said Felipe Gonzalez Arzac in a project description.

"However, it is the opposite effect that is generated when entering the house, which is decomposed and perforated almost entirely with a large courtyard as a compositional center," the studio continued.

"Both create a home that generates two very opposite situations, one from the outside and a very different inside," it added.

The central patio is joined by a smaller yard cut out of the front corner of the one-storey residence to form the main entrance. This leads into an L-shaped volume that wraps around central patio.

An open-plan kitchen, living and dining room is placed to the rear of the house. Sliding glass doors also run along the rear wall of the property and open up to a long swimming pool in the back garden. 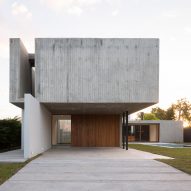 A host of pale wooden furniture and greenery offers pops of interest to the simple aesthetic. In the kitchen and dining area this includes a white counter, stools for casual dining, and the main dining table and chairs.

House plants fill a wooden bookshelf that separates these spaces from the living room. In here, the wood-framed large window to the garden is accompanied by translucent white curtains to offer shade in strong sunlight.

Other details include leather chairs and a pale, rough rug.

The bedroom, bathroom, and a second lounge area are located towards the front of the house. These spaces are accessed via a few small steps from the kitchen.

The overall ceiling height is consistent throughout the low-level home, meaning that the bedrooms have slightly less clearance. According to the architect, this creates a more private feeling for these spaces.

Argentinian architect Luciano Kruk has also used the material in several residences in the country.

Photography is by Javier Augustin Rojas.