Swedish company TRIWA is selling a limited-edition watch that features the hair of US president Donald Trump as hands, after the success of an April Fools-day prank.

TRIWA received hundreds of requests to produce the watch after publishing it as a joke on 1 April.

In response, the brand made the product available for pre-order three days later, promising to start production if 100 orders were received before 15 April.

Over 900 have now sold, making it the fastest selling product in the company's history.

"We weren't expecting any commercial power"

"We are blown away by the positive response we've received since it was made as an April Fools campaign," said TRIWA creative director Ludvig Scheja. "We weren't expecting any commercial power of the product."

The watch has been produced in a limited edition of 1,000.

The design features a cartoon illustration of Trump with a bright pink face and an open shouting mouth. Trump's hair is yellow and split into two parts to form the clock's hands.

"It is aligned with our mission to create stories for your wrist," Scheja added. "We as a brand need to be more focused on storytelling in order to make an impact and stand out in this highly competitive industry."

The caricature watch is among a number of designs that have poked fun at POTUS since his inauguration on 20 January 2017.

While focusing on his appearance, many are intended to draw attention to his controversial policies, such as plans to build a wall along the border between the US and Mexico. 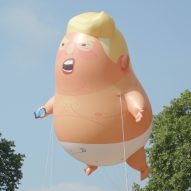 Examples include a comical blimp depicting the president as a baby, which a group of designers created as part of a bid to stop the president's visit to the UK. Artist Edel Rodriguez, meanwhile, redesigned the front cover of Trump exposé Fire and Fury, with an illustration of his face as flames.

Dezeen, architects and designers wade in on April Fools day

Available with either a mustard or a black strap, the final versions of the Comb-over watch are for sale on TRIWA's website for 99 € (£84.91).

This is not the first time that TRIWA has tried to trick its customers on 1 April. In 2017, it pretended it was launching a series of self-assembly watches inspired by IKEA products.

Dezeen also waded in on the fun this year with a spoof story that British architect Norman Foster had unveiled plans for The Unicorn tower to rival The Tulip. Other 2019 April Fools included plans for a gondola in Edinburgh, a dog-walking drone and Swiss Army sunglasses.