In this movie, artist Matthew Mazzotta says the success of The Storefront Theater, which won him Architecture Project of the Year at the inaugural Dezeen Awards, comes down to the way the local community has made use of it.

The Storefront Theater is a retractable theatre disguised as a shop. It was built to re-invigorate the main street in the town of Lyons, Nebraska, and create a community space for its residents.

Mazzotta told Dezeen that local community has embraced the structure, using it for a variety of activities.

"That's what I call success – how the community appropriates the project," Mazzotta told Dezeen. "You can always make a gesture but it doesn't really sing or fly until the community takes it and makes it their own,"

Using two hydraulic cylinders, a false storefront folds over the sidewalk of Lyons' Main Street and rolls out seating for 100 people. A rollable screen can then be paired with the structure in order to create a public theatre.

"Basically it’s a facade that bends down over main street, bleachers come out, a screen comes in and turns main street into a movie theatre," Mazzotta said.

The theatre has been used for a variety of events such as music concerts, movie screenings and other events for the community at large.

"They've had events that are anti-bullying, they've had movies and concerts. Recently I went to one where a very prominent Egyptian musician came and played," Mazzotta said.

Mazzotta told Dezeen that the site lent itself to becoming a theatre.

"Once I learned that one of the buildings downtown was just a storefront, it had no building behind it," Mazzotta said. "That's when we started taking that as the site. I remember walking out in the middle of the night and thinking 'ah this is actually two walls and a floor' and I could conceptualise it as a theatre." 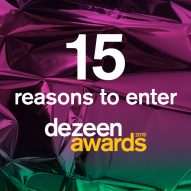 The architect's motivation was to reinvigorate Lyons Main Street, which according to Mazzotta has seen a decline in community life due to economic pressures and globalisation.

"This project came about through investigation with the people. They told me how downtown was the centre of the community life and how that has been destroyed over time by globalisation that has pulled all these businesses away," Mazzotta said.

Mazzotta argued that the value of architecture lies in the people that use spaces and that architects are beginning to design spaces with this in mind.

"Architecture has an enormous power over how we feel about ourselves and how we relate to each other. I think architecture is expanding beyond the envelope and I think it starts to think about who feels welcome in these spaces," he added.

Mazotta's theatre was also named for Rebirth Project of the Year at the inaugural Dezeen Awards ceremony last year, where 33 winners across the categories of architecture, interiors and design were announced.

Find out how you can enter your project ›