Dow Jones Architects designed the temporary building for the Maggie's charity, which provides free practical, social and emotional help to anyone affected by cancer, after a previous plan for a permanent building was abandoned.

The architecture studio designed Maggie's Cardiff to be "the same as a regular Maggie's Centre but smaller, quicker and cheaper."

The interim Maggie's Centre at the Velindre Cancer Care Centre is expected to be in place for 10 years, but could be kept indefinitely.

It was delivered in just 16 months at a cost of around one third of the proposed budget for the permanent building.

The existing hospital comprises a cluster of single and two-storey buildings surrounded by car parking and residential streets. The Maggie's Centre occupies a triangular site that backs onto a group of trees in a corner of the car park.

Maggie's Cardiff's exterior form is intended to reference both its residential setting and the broader context of the surrounding mountains. A series of pitched roofs evokes local housing as well as the outline of the nearby peaks.

Corrugated weathering steel clads the facades and roofs to give the impression that the building is a single abstracted form. The metal's orange hue recalls bracken that grows on the neighbouring hills in autumn.

The building's predominantly closed exterior responds to its context facing the car park.

A landscaped courtyard just inside the entrance provides an immediate connection with nature and the spaces open up towards the trees to the rear.

"Our building takes you on a journey from the bleakness of the carpark, through an intimate courtyard garden, into a range of calm and contemplative spaces which focus on the stand of trees and a new landscape garden," said the architecture studio.

As with all Maggie's Centres, the building is designed to create a homely space for socialising without the need for a reception desk, signage or any of the other formalities of a typical hospital environment.

The heart of the centre is a high-ceilinged social area illuminated by daylight that pours in through large roof lights. The space is named the "cwtch" after the small, intimate rooms found in typical Welsh homes.

Rather than subdividing the interior into a series of compartmentalised rooms, the various spaces are connected and arranged around wooden structures containing built-in storage and essential utilities. 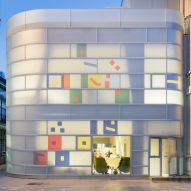 Douglas fir elements are used to subdivide the main spaces and are treated as giant pieces of furniture. One of these volumes contains shelving that forms part of the kitchen alongside an adjacent island unit.

A simple palette of untreated materials lends the interior a calm and welcoming feel.

Polished concrete floors are softened by the warmth of the wooden surfaces, and white-painted walls help the space appear bright and neutral.

The architecture studio collaborated with various artists to introduce art to the facility.

A painting by Welsh artist Osi Rhys Osmond, tiles by Linda Florence and a number of pieces lent by the National Museum of Wales adorn the walls.

Art also features outside the building, with bollards by artist Anthony Gormley protecting the centre from passing cars and a sign by ceramicist Pat O'Leery welcoming visitors.

Other Maggie's centres around the UK designed by well-known architects include a glowing glass facade by Steven Holl in London, Norman Foster's timber greenhouse for Manchester, and a centre with a reinforced concrete shell in Aberdeen by Snøhetta.