Dezeen promotion: architects and designers working throughout the Middle East and Africa now have more time to submit hotel projects to the 2019 AHEAD MEA awards, which has extended its deadline.

The Awards for Hospitality Experience and Design (AHEAD) honours outstanding design-focused hotels from across the world, accepting entries from four different regions: the Middle East and Africa (MEA), Europe, the Americas and Asia.

Interested applicants operating in the Middle East or Africa will now have until 31 May 2019 to submit hotel projects that have been opened, reopened, or renovated between January 2018 and February 2019.

"Judges will be looking for submissions showing rigorous and appropriate design, demonstrating a sensible use of budget to contribute to the guest experience, as well as the 'theatre' of hotel life while satisfying the client brief," explained the awards team. 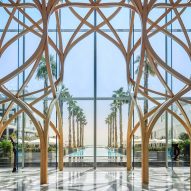 Winners of the MEA awards will be announced at a ceremony in Dubai's Caesars Palace Bluwaters hotel on Wednesday 13 November, which will be attended by leading hoteliers, architects, interior designers, and industry specialists.

Dubai's Bulgari Resort was named as Hotel of the Year in the 2018 edition of the AHEAD MEA awards. Designed by Antonio Citterio and Patricia Viel, the five-star hotel was praised by judges for being a "great example of luxury that whispers rather than shouts".

It went against other hotels like The Silo, which occupies a former grain storage tower in Cape Town, and the Bisate Eco Lodge, which comprises of six opulent guest pods nestled amongst a forested hillside in rural Rwanda.

Cost per entry for the 2019 awards is £250 and applicants are permitted to compete in more than one category.

First-place projects from the Middle East and Africa heats will go on to contend against winners from the other regions in AHEAD's global biennale, where worldwide titles are awarded.