Henning Larsen will create the city centre with Chinese consortiums Shenzhen Cube Architecture and Swooding Architects, plus the Urban Planning & Design Institute of Shenzhen and Why Art Projects SL, after the three teams were named winners of a design competition.

Named Shenzhen Bay Headquarters City, the masterplan aims to create a new district on the waterfront that would become the new centre of the city in southeast China.

The district, which will contain offices and three signature towers, is being created to attract companies to move their headquarters to the city. The architects will now collaborate with the government to refine the proposal.

"Our design aims to make Shenzhen the waterfront city it should always have been," said Claude Godefroy, design director of Henning Larsen's Hong Kong office.

Alongside offices, the development will contain conference facilities and cultural venues, the largest of which will be located on the waterfront.

"To create an attractive waterfront we brought commercial and cultural facilities meters away from the seashore, so citizens will finally be able to enjoy the atmosphere of Shenzhen Bay in an activated urban environment, like in Sydney, Singapore or Copenhagen." 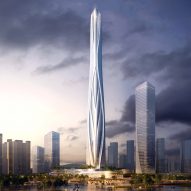 Henning Larsen also proposes creating a series of cultural venues at the top of the district's tallest towers to create a "skyline of art".

The studio envisions the district as being car-free at street level, with vehicles placed underground in a series of tunnels connected to underground car parks.

"Most of the commuters' cars will never surface in the district. This will change everything for the quality of the pedestrian experience and will be quite unique in China," said Godefroy.

Located between Hong Kong and Guangzhou, Shenzhen is rapidly developing with numerous skyscrapers being built in the city.

Earlier this year Kohn Pedersen Fox completed a supertall bullet-shaped skyscraper for the China Resources export company, while in 2018 NBBJ and BIG completed towers in the city.

Foster + Partners is currently designing a headquarters for DJI and a tower for the China Merchants Bank, Steven Holl is planning a pair of towers connected by plant-filled bridges and Adrian Smith + Gordon Gill is creating China's tallest building.