Piero Gandini has resigned as CEO of Flos, the Italian lighting brand founded in 1962 by his father, following a clash of views with its new parent company Design Holding.

Gandini, who has been at Flos for 22 years, also stood down as chairman of Design Holding, the luxury furniture and lighting group he helped create.

The departure is due to "different strategic and management views of the new holding company", according to a statement issued yesterday.

The move ends the Gandini family's involvement with Flos, which was established 57 years ago in Merano, Italy, by Piero's father Sergio.

Design Holding was formed in September 2018 with Gandini as its chairman.

The group is made up of three leading design companies: furniture brand B&B Italia, and lighting brands Flos and Louis Poulsen.

The three brands showed together on a 4,000 metre-square stand at the Salone del Mobile during Milan design week last month, which Gandini described as one of the largest in the fair's history.

Gandini was upbeat about the new group when he spoke to Dezeen last month, saying that Flos and Louis Poulson  "can perfectly work together". However the statement suggests there were underlying issues. 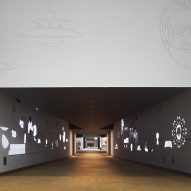 In the statement, Gandini thanked the company and shareholders.

"Leaving a group with strong potential, as recently demonstrated by its great success at its debut at the Salone del Mobile furniture trade show, as well as a company, Flos, which enjoys a position of absolute leadership both for its financial results and its design culture, Mr Gandini thanks the company and its shareholders for the great trust they have placed in him," the statement reads.

"He wishes the vice chairman Giorgio Busnelli and the CEO Gabriele Del Torchio all the best for Design Holding and Flos's future development and success."

Gandini took over control of Flos when his father Sergio died in 1999. He built the company into one of the most innovative and successful brands in the lighting sector, working with designers including Philippe Starck and Michael Anastassiades.

In September 2014 he sold an 80 per cent stake of the business to Investindustrial, an Italian-owned private equity firm, but remained at the helm.

Investindustrial is one of the investors in Design Holding, owning 48 per cent.

The Carlyle Group owns a further 48 per cent, with Gandini and Busnelli sharing the remaining four per cent.

Gandini set out the reasons for selling a majority stake in the family business in a 2014 interview with Dezeen.

"I love the fact that Italian companies are driven by families," he said. "This can be a fantastic advantage. But it is also sometimes a weak point."