A new generation of designers is reinventing aluminium, a material that is cheap, abundant and relatively easy to work with, for experimental one-off furniture designs.

One of the world's most common materials, aluminium emerged as a new focus for young designers at the Collectible art and design fair in Brussels back in March.

The show, currently on view in London, highlights different techniques that can be used on the metal, including hammering, casting, hand-polishing, spinning and laser cutting.

"We noticed that lots of the younger designers that we work with were starting to work with it, but what interested me was how differently they were all manipulating it," said Laura Houseley, founder of MDR Gallery and Modern Design Review magazine.

"These really expressive designers with signature aesthetics were all making aluminium do something different for them," she said. "They're making it more desirable."

"Aluminium has a lot of potential"

Elsewhere at the fair, London-based Studio Furthermore showed its Moon Rock furniture collection, using blocks of holey aluminium as a stand-in for an imagined lunar material that designers might have access to in the future.

Belgian designer Nicolas Erauw's cast-aluminium Chair T-006 was also one of the highlights, of part of the young designers showcase at Collectible.

The chair is part of an ongoing series of objects made using a combination of lost-wax casting and wax-dipping.

"A lot of current design trends come from the younger, more emerging designers with their own workshops who are quite free to work as they wish," Houseley told Dezeen.

"That kind of category of designer tends to use materials that have what we would deem a lower value. Aluminium is really accessible for them and it's also very easy to manipulate in a small workshop environment." 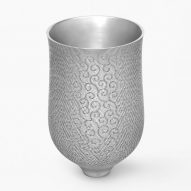 "Obviously it's been around a long time – Eros, the sculpture in Piccadilly, I think that was the first aluminium art work in the world, 10 years before the Wright brothers flew for the first time – but it's more accessible than classical bronze from a designer's point of view."

The metal has an "industrial look and feel"

Aluminium was first extracted in usable form over 190 years ago and was quickly adopted into a wide range of industries and products. The most prolific and prosaic of these is the aluminium drinks can – approximately 200 billion cans are used every year.

It is also strongly associated with aeronautics, and the car and tech industries. Part of its appeal to younger designers now is its contemporary aesthetic, in contrast to more "nostalgic" metals like bronze and copper, which have proliferated in recent years.

"I'm a real fan of the industrial look and feel," said Erauw.

"Aluminium is used quite often in the die-casting process, for example in the car engine industry and because of this, aluminium gives a more industrial feeling than bronze."

In design, aluminium has long been associated with sleek, mass-produced objects, rather than the hand-worked collectible pieces on display at Collectible. Examples include the Bialetti Moka coffee pot, recently reinvented by David Chipperfield, Emeco's Navy Chair and the Apple family of products.

“We use aluminium because it has incredible strength, durability and sheer beauty,” said Apple engineer Laura Legros at the product reveal event for the 2018 MacBook Air.

Affordable and easy to manipulate

For many of the young designers working with the material today, aluminium's main appeals are its relative affordability and how easy it is to manipulate, making it an ideal material for experimental work.

"Aluminium is low cost, easily bendable and melts at a low temperature, which means I can experiment with casting and mould-making techniques without starting a fire," said Oslo-based designer Sigve Knutson, whose hammered and cast aluminium pieces were part of the Alu! show.

"I started using aluminium as a student [at Design Academy Eindhoven]. In Eindhoven there is a great foundry near the school and aluminium casts was really the only thing I could afford," Knutson told Dezeen.

"Aluminium can easily be hammered into shapes without heating it up. It makes the whole process a lot easier."

There are other significant advantages in using the metal, including its lighter weight and the wide availability of standard parts, sheets and beams that can, in the right hands, take on a different value.

"There are not many possibilities in coatings or patinas, but this made us experiment with the texture what resulted in the silvery skin on the aluminium," said Bram Vanderbeke, whose contribution to Alu! was the Pyramid shelves designed with Wendy Andreu.

"What is great with aluminium is that this metal is able to create an oxidation which is protecting itself," he explained.

"Aluminium creates alumina which is basically a transparent, very hard and resistant coating of a few nano-millimetres, which covers the full surface. Therefore, this metal has the ability to keep the same aspect overtime and does not necessarily need a coating like paint or varnish."

Could become world's most eco-friendly metal

Aluminium also has the potential to become more environmentally friendly than any other metal.

The production of virgin aluminium requires mining of Bauxite rock and a smelting process that produces large amounts of greenhouse gasses. 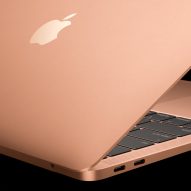 But aluminium is highly recyclable. Its low melting point makes it cheaper to reuse than other metals, and many manufacturers, like Apple, already recycle their offcuts.

Currently only a third of the world's aluminium is recycled, because the metal is often used in alloys with other materials, and separating them can be expensive and difficult. Contamination is also a major issue for recycling facilities.

As a result, many mass-produced designs are made from a mix of recycled and "raw" aluminium, or avoid recycled options altogether.

This could be set to change, with Apple leading the way. The tech giant has announced it will team up with aluminium manufacturers Alcoa and Rio Tinto to develop a low-emissions smelting process by 2024. It also is producing a MacBook Air using 100 per cent recycled aluminium, thanks to new recycling processes.

Initiatives like this could bring about change across the design industry.

"At the end, there is no perfect material which is going to solve [all our] environmental problems," added Vanderbeke. "Using good materials for a good use is the first step towards a reasonable way of producing."