The interaction between light and the architecture of John Pawson's Oxfordshire home influenced this collection of graphic blankets for Danish homeware brand Tekla Fabrics.

Each blanket features lined motifs based on the shadows cast by light interacting with the architecture of Pawson's house that he shares with his family in the countryside surrounding Oxford.

"Home Farm was previously a working farm and when I first visited, I felt very deeply the atmosphere of the dilapidated historic structures and the way the surrounding landscape unfolds in a series of ripples to the horizon," said Pawson.

"Everything I have done there has been driven by the idea of preserving and enhancing the sense of place," he explained.

"Each design captures a specific moment of graphic interaction between architectural space and light. I wanted to create a series of textiles that is both rigorously abstract and resonantly site-specific," he continued.

The woven blankets are double-sided and have dual-toned colour palettes in either pale pink and white or red and maroon.

"The blankets are very much a consequence of the immersive intensity of the architectural process. All of the patterns and tones originate in this single location," said Pawson.

"I have always said that, for me, whether I am designing a monastery, a boat or a blanket, it's all architecture and therefore all a product of the same thinking," he explained.

Once the designs were chosen, Pawson worked with Charlie Hedin, the founder of Tekla Fabrics, to refine the weave and colours.

"The collaborative process was seamless. Charlie instinctively understood exactly what I wanted to achieve with the designs," said Pawson. 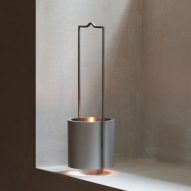 "I enjoy working with young companies like Tekla Fabrics because the passion is strong and the thinking is open. I instinctively knew when I met Charlie that here was someone who shared my commitment to making a project the best version of itself," he continued.

Recent projects by the award-winning British architect include an ornate hotel in Tel Aviv and the conversion of a second-world-war bunker into a museum of Southeast Asian art in Berlin.