This photoset by Australian photographer Tom Ross captures a geometric, concrete research laboratory in Boulder, Colorado, which was designed by architect IM Pei who passed away this week.

"Whenever I travel I do an architecture survey of the area, particularly looking for Pei's work," Ross told Dezeen. "Since seeing the JFK Library when I was studying in Boston 10 years ago I've been photographing his work."

Completed in 1961, Pei's Mesa Laboratory forms part of the National Center for Atmospheric Research on Boulder's outskirts. It has a dramatic, remote setting located on a hilltop that overlooks a golden valley to the west and south. Forested terrain and the Flatirons, which are massive rock formations, rise in the background.

"Pei's work is often unmoored from its immediate built environment," Ross said. "The Mesa Lab is a great example of this."

"Where an architect might usually be responding to the surrounding buildings, or fabric of the city, here he has to respond to the Flatirons section of the Rockies," he said.

"Structures created by tectonic plate movement over millions of years, what a site to respond to," he continued. "Intimidating for an architect surely."

The Chinese-American architect's response was to draw on the cliff dwellings that the Ancestral Puebloans built in Mesa Verde national park, in southwest Colorado. Called Cliff Palace, the sprawling ancient village is embedded into the rockface and made of stone and earth to blend in.

Pei followed this by designing Mesa Lab like a miniature neighbourhood, arranged as a series of blocks set out in two clusters.

The structures are formed of concrete that is made from sandstone, and bush-hammered to create rough, striated marks along the surface. The concrete is also tinted pink to pick up on the hues of the sandstone cliff surroundings.

Ross says it gives the impression that the complex has been "carved out of the cliff face".

"The basic elements Pei has used from the Native American cliff dwellings are really beautiful," said the photographer. "Towers, curved spaces, and even the square joining to a long vertical line motif expressed in the cutouts and towers can be seen in the original dwellings."

Ross, who took time out of the trip to Boulder to capture Pei's laboratory, said he was surprised at the scale of the complex, which totals 22,600 square metres.

"Travelling from Boulder it appears quite small, but once you're there you feel like an ant," he said. "Other than the occasional arched cutout there is almost nothing human scale about the building."

He described the experience of shooting at high altitude as a "photographic dream" due to the quality of sunlight at high altitude. Ross' images capture the building in dark and light hours, with strong shadows featured in both.

"Like a lot of Pei's work it has the feeling of a religious building, a building made in worship of something greater," Ross continued. "Which I love in this context as it is atmospheric science we are worshipping, a worthy idol."

Ieoh Ming Pei is known for his bold modernist style that experimented with strict geometries and shapes, and a portfolio that comprises museums, libraries and civic centres. His most significant buildings include the Museum of Islamic Art in Doha, the glass-and-steel pyramid at the Musée du Louvre in Paris, and Boston's Kennedy Library. 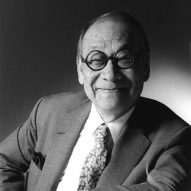 The architect, who won the Pritzker Prize in 1983, passed away this week aged 102.

A number of architects and critics have paid tribute to him following his death, including Norman Foster who described him as a "true master of monumental modernism".