Architects from Zaha Hadid Architects, Heatherwick Studio and AL_A were among participants in a five-kilometre race in London's Hyde Park, raising £60,000 for the Motor Neurone Disease Association.

Rogers Stirk Harbour + Partners director Ivan Harbour and AHMM cofounder Simon Allford were also among the 122 runners that took part in this year's edition of the HD5K race, along with designer Jason Bruges and architect Simon Smithson.

The HD5K race is organised by architectural visualisation studio Hayes Davidson in honour of its late founder Alan Davidson, who was diagnosed with Motor Neurone Disease in 2012. Davidson died in August 2018, aged 58.

"We are delighted and grateful to once again feel the support of so many friends of the studio," said David Bullock, joint managing partner of Hayes Davidson, "and it's an honour to carry on Alan's legacy in this annual event."

"To be able to raise money for the MND Association, a charity incredibly important to us is wonderful, and knowing that we are supporting others suffering from this incurable cruel disease is what drives us to make the event a success."

The route started at Hyde Park bandstand at 7pm on Thursday 16 May, and took runners around the Serpentine lake and Speakers Corner.

Taylor Rogers from Hopkins Architects was first to cross the finish line, in 16 minutes 29 seconds. He was followed by last year's winner, Giacomo Pelizzari from Takero Shimazaki Architects, in second, and Ciaran Garrick from Allies and Morrison in third.

The fastest female was Cheryl Evans from AHMM, who completed the race in 20 minutes 10 seconds, followed by Hanna Martin-Merchant from AL_A and Koryn Steinbok from Chris Dyson Architects. 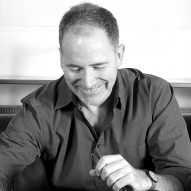 The Alan Davidson Foundation coordinated the fundraising and matched the £30,000 raised by runners, bringing the total up to £60,000.

"The MND Association is grateful to the Alan Davidson Foundation, Hayes Davidson and the wider architecture and design industry for its support in the fight against MND through the annual HD5K event," said Sally Light, CEO at the Motor Neurone Disease Association.

"It is heartening to see colleagues and friends joining together and raising vital awareness and funding for this brutal disease."

The Alan Davidson association hopes to make the charity event an annual fixture.

Donations for 2019 can still be made by visiting www.justgiving.com/alan-davidson-foundation.