Located within a municipal waste centre in the town of Mae Sot, the timber community hall stands alongside a playground, vegetable garden and football pitch.

The building by Estudio Cavernas serves as a learning hub for children with daily classes in Thai, English, critical thinking and football. It also provides local residents with a venue for weekly movie screenings and community events.

The frame as well as the flooring are made from reclaimed timber and the structure is elevated from the ground to avoid flooding and destruction during monsoon season.

Due to the extreme weather conditions, the southwest face of the building is surrounded by teak trees, protecting the structure from rainfall and extreme heat.

The folded roof has three large triangular openings that allow natural light and ventilation in to the building.

An inner layer of aluzinc supports the sugarcane thatch and a middle layer of vertically placed eucalyptus, creating an air chamber that protects the building from the heat of the sun.

The centre is accessed by a ramp alongside a set of stairs that can also be used as a break-out space to relax between activities.

Estudio Cavernas designed the flexible interior of the centre so that several activities can take place at the same time. The large open space can be divided by a mobile partition wall, which also serves as a bookshelf and a whiteboard.

Green Island was built by members of the community helped by experienced construction workers.

"Our idea of the community centre came with interpreting some of the social problems in the dumpsite migrant community by educating the kids and their families," explained Juan Cuevas, co-founder and design director of Estudio Cavernas. 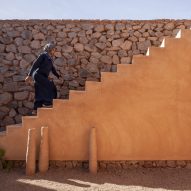 "The community was involved from the very beginning and helped with identifying the needs of the settlement," continued Cuevas.

"After the approval, the team was gathered, mixing experienced construction workers, which had been trained for a few years, and members of the community."

Green Island was funded by PlayOnside, an organisation focused on youth empowerment and gender equality through sports.

"The kids of the community are often at risk when wandering off to the dumpsite, involving themselves in dangerous and illegal activities," said Cuevas. "The community previously didn’t have any gathering or social space."

"PlayOnside was responsible for raising the funds, monitoring the construction process, and is also responsible for implementing the educational programs," explained Juan Cuevas.

"We only can consider it a successful project if we are certain about the continuity of the learning activities as well as the maintenance of the infrastructures."

Together with Les frères Molcard, a French not-for-profit organisation that specialises in planting trees around the world, Estudio Cavernas was also responsible for the design of the landscape around the centre.

Trees were planted around the community centre and a vegetable garden was created to encourage the children to grow their own food.

Estudio Cavernas is a not-for-profit organisation, which closely works with local migrant communities and organisations in Thailand to meet their needs for housing and infrastructure.

Other examples of community centres include Women's House in Morocco by Building Beyond Borders, a community hall for a Fijian village by Caukin Studio and a community hall built from repurposed materials in the Utah desert.

Photography is by Dennis Amirtharaj