Amazon billionaire Jeff Bezos has revealed plans for a lunar lander, claiming that humans will become a space-faring species in the near future.

Bezos, who funds the Blue Origin space programme, presented the Blue Moon lander at an event in Washington DC earlier this month.

His suggestion is that future human beings will live on a series of manufactured worlds in space, rotated to create artificial gravity, each holding more than a million people.

According to Bezos, people will continue to live on earth, but heavy and polluting industries that damage the planet will no longer take place here.

Bezos suggested that space colonies will solve the problem of resource depletion and avoid the rationing that inevitably occurs "when unlimited demand meets finite resources".

"We will run out of energy on earth," he said. "This is just arithmetic, it's going to happen."

"We could have a trillion humans in the solar system. This would mean 1,000 Mozarts and 1,000 Einsteins. This would be an incredible civilisation," he added.

The colonisation of space also provides a business opportunity for Blue Origin. Bezos unveiled a mockup of the Blue Moon lander at the event in the US capital, designed to deliver the basic infrastructure for future missions.

The structure consists of a circular element that holds the fuel tank for liquid hydrogen, protected by square window-like panels that stands on four spindly legs.

Bezos revealed that Blue Origin is aiming for a moon landing by 2024, in line with the current administration's aims.

Blue Moon will be able to soft-land on the surface of the moon with up to 6,500 kilograms of weight, to within 23 metres of accuracy.

Bezos claims the lander will be able to carry various different payloads on its upper deck and land as many as four sizeable moon rovers at the same time in order to explore its surface. 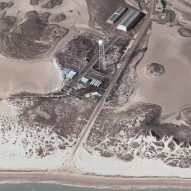 The lander weighs roughly 15 kilograms when loaded with fuel, but by the time it touches down on the lunar surface, it will weigh just over three kilograms.

It can autonomously navigate in space using a "star tracker" and is due to undergo its first test this summer.

Bezos is one of a number of wealthy men pursuing their own space programmes, along with Elon Musk and Richard Branson.

Branson's Virgin Galactic space tourism enterprise undertook a successful test flight in April 2018, whilst Musk has expressed a desire to colonise Mars by 2022.