A dodecahedron is nestled within an icosahedron to form this pendant lamp designed by artist Olafur Eliasson for Danish lighting brand Louis Poulsen.

It comprises two three-dimensional shapes that slot together, even though they are complete opposites.

LEDs sit in between the two layers, directing light into the centre so that it can be reflected back out.

According to Louis Poulsen, the inner layer "seemingly floats inside, reflecting the light in a spherical light distribution".

The overall effect is a light that takes on different geometries, depending on the angle from which you look at it.

Eliasson often plays with the laws of geometry in his work, with examples including the Cirkelbroen bridge in Copenhagen and the colourful sets he created for Wayne McGregor's Tree of Codes ballet.

Even the latest version of his solar-powered Little Sun lamp, designed for developing countries, mimics the faceted geometries of diamonds. 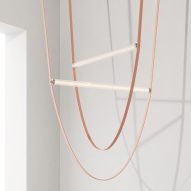 "I'm very excited to bring my longtime interest in geometry and light into this collaboration with Louis Poulsen," said Eliasson.

"What distinguishes it from so many lamps is that it shines in towards the core, from which the light is reflected back out onto the surroundings. In one form, the lamp combines precision in design with quality atmospheric lighting."

The OE Quasi Light is retailing for around €12,000, making it one of the most expensive lights in Louis Poulsen's collection. But the brand expects it to become as a much of a classic as some of the midcentury designs by Poul Henningsen or Arne Jacobsen.

"The OE Quasi Light is an inspirational product, a purposeful design piece that is uplifting to those in its presence," said Søren Mygind Eskildsen, CEO of Louis Poulsen.

"At Louis Poulsen we have been designing light for over 145 years, and the challenge is always the same, crafting a light that does not just illuminate a room. A good light is functional and beautiful, but most importantly, interacts with and shapes the environment," he continued.

"I believe Eliasson's OE Quasi Light will become a part of the heritage and history of Louis Poulsen, joining the ranks of our other iconic products, and creating good light for all."

Louis Poulsen, set up 145 years ago, was acquired by Italian investment firm Investindustrial last summer. At the time, Eskildsen said he thought the sale would open the brand up to a wider international market.

The three companies together form the Design Holding group, which is 48 per cent-owned by Investindustrial.