Marc Mimram Architecture & Associés has incorporated greenhouses into all four of the stands of the Court Simonne Mathieu at Roland Garros, home of the French Open.

Named after former French tennis player Simonne Mathieu, the 5,000-seat stadium officially opened this week for the start of the French Open. It is now the third show court for the tournament, which this year takes place between May 20 and June 9.

Located in the Jardin des Serres d'Auteuil botanical garden, the stadium is designed to function as both a court for the tennis tournament and an extension to the garden's public facilities.

"The Simonne-Mathieu tennis court is both a showcase for high-performance sport and a renewed botanical development," explained Marc Mimram, founder of Marc Mimram Architecture & Associés.

"Just as the landscape designer Michel Corajoud wished, a dialogue between gardens and sport, botany and tennis, technical and physical performance has emerged from a shared space," he told Dezeen.

The greenhouses are all built around the outside of the sunken court.

They completely surround the stadium, with two 70-metre-long structures stretching along the east and west stands, and two 40-metre-long enclosures connected to the north and south stands.

The stadium's concourse, which provides access to the stands, runs alongside the greenhouses so that spectators can see the botanical collections.

"The qualities of the garden – its horticultural collections, its botanical diversity – will be made accessible to a large number of visitors and will be open for everyone's pleasure," said Mimram. 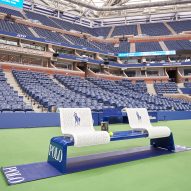 Mimram designed them to be modern structures that sit comfortably alongside the garden's existing 19th-century architecture.

"The presence of structures from the past in no way inhibits this confident contemporary architecture – quite the contrary," explained Mimram.

"The different activities intersect in time; the tennis tournament is an integral part of the development of the botanical garden."

Mimram believes that this unique stadium is an example of how sports venues have the potential to be different from each other.

"We think that the sports facilities should not be autonomous, closed in on theirselves, but s on the contrary derived from and in dialogue with their environment," he said.

"We defined here a new concept, a high-performance sports facility in relationship with nature."

Marc Mimram Architecture & Associés is a Paris studio led by Mimram. The practice has previously designed a TGV station in Montpellier and added an aluminium-clad building to Strasbourg architecture school.

It is one of several studios that have completed stadiums this year. Populous delivered the new home of football club Tottenham Hotspur, which it described as the  "best stadium in the world".

Zaha Hadid Architects also recently completed an air-conditioned stadium in Qatar, which will host matches during the World Cup in 2022.