American firm Office of Jonathan Tate has completed a cluster of sculptural white homes on an urban New Orleans site that are meant to attract buyers on a limited budget.

The project, called Saint Thomas at Ninth, is part of the Starter Home initiative, which aims to create affordable housing within gentrifying urban neighbourhoods in the coastal Louisiana city.

The programme also encourages density and modest-sized housing as a way to foster more sustainable living.

The initiative was started by local studio Office of Jonathan Tate, or OJT, which teams up with developers to create the speculative homes. Other projects completed as part of the initiative include 3106 St Thomas and 4514 S Saratoga, both single-family dwellings.

"The programme uses targeted land acquisition to reduce embedded cost – along with contemporary, compact designs – to keep the price of the home below market norms," said architecture firm in a description.

"Saint Thomas at Ninth is an expansion of this programme that seeks to renegotiate existing site conditions, both physical and legal, in order to maximise residential density."

The new development – which won a national AIA design award –  is located on a corner site in Irish Channel, an industrial zone that is transitioning to a residential neighbourhood.

The project entailed the adaptive reuse of a warehouse and the construction of nine, detached condominium buildings. The housing complex contains 12 units, with a total interior area of 15,600 square feet (1,449 square metres).

While past projects in the Starter Home programme have targeted first-time home buyers, the Saint Thomas at Ninth development is meant to appeal to a wide spectrum of people, from young families to older couples looking to downsize. Prices start at $288,000 (£226,539).

The team's first challenge was addressing the area's zoning laws, which mandate that single-family homes occupy fairly large parcels. Because of this, only three units were initially allowed on the rectangular, 12,800-square-foot (1,189-square-metre) site.

Using some clever tactics, the team was able to increase the number of allowable units to 12.

The buildings are tightly organised around a courtyard/driveway that runs through the centre of the site. The converted warehouse encompasses three condos, each rising two levels. A portion of the warehouse was removed to make way for the courtyard.

Each new building contains a three-storey condo. Rather than simple, repetitive boxes, the team created an assemblage of different-shaped volumes with multi-pitch roofs.

"In New Orleans, where houses in close proximity are the norm, we traded long and flat dwellings for tall and skinny ones," the team said.

Facades are wrapped in corrugated metal and cementitious panels, materials chosen for their durability. The white finish helps reduce heat load – an important consideration in New Orleans, known for its hot and sticky summers.

The cladding comes with a 20-year warranty, ensuring that homeowners won't have to deal with "the routine painting and siding replacement most homes in our region have to negotiate", the architects said. 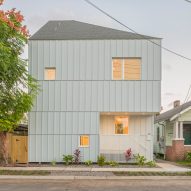 The lower portion of the dwellings are carved away to make room for parking, as the city requires at least one parking space per unit. The upper portion of each volume notches outward, allowing for more interior space. Slender voids between the buildings accommodate passageways and porches.

"Where typical shotgun dwellings in the city abandon this residual space, in this project, this area is reclaimed as a front porch, giving each dwelling a sense of entry and ownership," the team said.

Inside each residence, the ground floor contains an open-plan kitchen, dining area and living room. Privates areas are located on the upper two levels.

Interior finishes include white kitchen cabinetry and concrete and wooden flooring. Stairways are lined with coloured walls with cutouts, allowing light to filter through.

The homes have a number of elements that help minimise energy use, including a mini-split mechanical system, on-demand water heaters, LED lighting, operable windows and high-efficiency appliances. Moreover, the homes' verticality enables hot air to be carried upward and out – a passive strategy known as stack effect.

The modest size of the dwellings also helps reduce power consumption, in contrast to a typical single-family home that often is "bloated with unused space".

"By cultivating a 'right-fit' approach to building, the development is able to maximise utility and minimise energy use," the team said.

The Starter Home programme was launched by OJT in response to the lack of affordable homes in central New Orleans, a topic of major concern among local residents and housing research agencies.

"Affordable opportunities in the core neighbourhoods of New Orleans, much like other cities throughout the US, were quickly eroding, if not already unavailable in the most desirable areas," the firm said.

In addition to providing affordable housing options, the firm hopes to encourage more contemporary-style housing in New Orleans, where the focus is often on preserving historic architecture.

For the Saint Thomas at Ninth development, the firm worked closely with city planners and heritage officials in order to build trust in the project – and future ones like it.

"The apprehension about new approaches to building is a part of the city's culture and requires a sympathetic approach," the team said.

The rising cost of housing is a pressing issue around the globe. Other solutions include laneway housing, such as a compact dwelling in Calgary by Studio North, and proposals to sell unfinished "DIY" homes that residents must complete themselves.

Photography is by William Crocker.