Actor Brad Pitt has reportedly agreed to a settlement of $20.5 million for the owners of homes built by his Make It Right Foundation housing charity, which suffered from water leaks, black mould and foundation issues.

A settlement was reached earlier this week that will see $20.5 million paid to the homeowners, who brought legal action after numerous defects to their homes were found, according to a report by NOLA.com.

The money for the settlement will be provided by Global Green, a California-based non-profit that was not named in the lawsuit but has links to the Hollywood actor. Pitt is listed as one of the non-profit's advocates on its website.

"I am incredibly grateful for Global Green's willingness to step up and provide this important support for the Lower Ninth families," Pitt said in a statement.

"We collaborated in the early days post-Katrina and we are very fortunate to have Global Green's generous continuing commitment to help address the challenges around these homes and others in need."

"Hopefully this agreement will allow everyone to look ahead to other opportunities to continue to strengthen this proud community in the future.​"

"They were living in something that was deteriorating quickly"

Attorney Ron Austin, who began legal proceedings against the non-profit in 2018, explained that all the money would fund repairs to the homes.

"You're talking about a group of people who didn't have an option to move and buy or rent a second home," he told the Guardian newspaper.

"This was their life savings and they were living in something that was deteriorating quickly around them. So they're relieved and grateful." 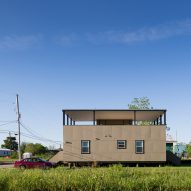 The Make It Right Foundation was established by Pitt, American designer William McDonough and Graft Architects with the aim of building 150 houses in a hurricane-devastated Lower 9th Ward of New Orleans following Hurricane Katrina in 2005.

However, soon after people moved in in 2009, residents reported numerous issues with the homes including water leaks, black mould and foundation issues.

After numerous attempts to get the Make It Right Foundation to rectify the issues, Austin began legal procedures.

In total 109 houses were built by the non-profit including a Gehry-designed staggered duplex, a "floating house" by American studio Morphosis and an elevated property by Los Angeles' Atelier Hitoshi Abe.

Recently, a house designed by Adjaye as part of the project was reportedly "in imminent danger of collapse" and was scheduled for demolition.