New York studio Champalimaud has transformed a 1920s residence that was destroyed by a hurricane into a luxury holiday home on a resort in Dorado, Puerto Rico.

Called Su Casa, the property forms part of the Dorado Beach Ritz-Carlton Reserve, which was ravaged by the Caribbean island's deadly Hurricane Maria in 2017.

The residence was built in 1928 by Clara Livingston, a pilot whose father owned the 1,400-acre (566-hectare) property in Dorado, to replace a wooden plantation house that was wrecked by the 1903 Hurricane San Felipe.

Livingston sold the property to Laurence Rockefeller, a third generation of the wealthy American Rockefeller family, who turned the house and the surrounding lush site into the Dorado Beach resort in 1958. Livingston's property was renamed as Su Casa, which translates to your house, and used as a restaurant and a golf house.

Luxury hotel group Ritz Carlton took over the property in 2012 and has run the house as a private holiday home for families and large groups. In 2018, it enlisted New York-based studio Champalimaud to oversee the renovation of the home, following the aftermath of the hurricane.

"The property was still destroyed," Champalimaud's principal designer Anna Beeber told Dezeen. "It just looked like something had blown through: floors were buckled, doors wouldn't close and half the roof was gone."

Beeber and fellow principal Elisabeth Rogoff designed the renovation with the aim to restore the key characteristics of the residence. Livingstone had completed in the mission-style, choosing thick concrete walls to bolster from future damage, long wooden eaves and Spanish clay tiles. 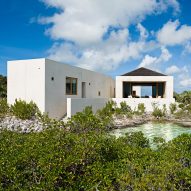 The design team also wanted to makes the most of its surrounds, which includes greenery, a colourful tiled patio at the entrance and a grand infinity swimming pool that extends towards the Atlantic Ocean.

Champalimaud pared back the material palette, transitioning from dark wooden window frames and terracotta flooring to lighter and brighter finishes such as limestone and pale wood.

"What you're seeing is all tied together in this harmonious flow that marries nature and the interiors," said Beeber. "It creates a really serene environment that allows you to relax and think and read and just be in this very elegant kind of barefoot way that's comfortable."

"It's not fussy, and I think what you'll see and we'll talk about the materials as we go through is that the palette is very chilled out," she added. "It's very calming and it's meant to cause your eyes to really look out."

This simple palette continues throughout the interiors, which feature cream-coloured walls and a mix of limestone, black and white tiles, and pale wood flooring.

Livingstone's original antique wooden furniture is peppered throughout, alongside pieces that Champalimaud custom made in New York, as well as designs by studios including Allied Maker and Minotti. A highlight of the property is a series of colourful murals created by Puerto Rican artists.

"We really want mine the house to feel like it had a sense of place," said Beeber. "So people weren't arriving and kind of a whitewashed Walmart mansion but they really felt like they were in Puerto Rico on Doblackrado."

The studio's main change to the property was enclosing a slender terrace along the front of the house. This now forms a light-filled hallway flanking the large living and dining room.

"This was our really big move," said Beeber.

The two levels of Su Casa were originally connected by two exterior staircases. Champalimaud introduced a lift inside so that families could move around more easily.

Five bedrooms with en-suite bathrooms are spread across the two-storey property. Each features large windows and are styled with neutral finishes, bright linens, and hand-woven headboards.

Along with some bedrooms on the ground floor is a kids' playroom and movie theatre, featuring pink-painted walls and red furniture. These hues draw on the original pink colour of Livingstone's property.

Other areas include a massage room and various outdoor areas that overlook the pool and the ocean. These include a long table covered by a pergola and a sofa that wraps a fire pit.

"We worked very hard to create areas on the exterior and the interior, which are both intimate," said Beeber.

"They're also inviting, so you could sit there with a book for the afternoon, but you could also have your kids piling all over you."

Champalimaud was founded by Portuguese designer Alexandra Champalimaud in Montreal, Canada in 1981, and moved to New York in 2004.

Su Casa is among a number of luxurious holiday spots that the studio has completed, including the transformation of an English-style country house into the cosy Troutbeck hotel in New York's Hudson Valley.

Photography is by Emily Andrews.