Triangular windows fold up the corner of this OMA-designed housing block, which marks the architecture firm's first ground-up structure in New York City.

The residential project is designed to be as unique as possible, while paying homage to neighbouring pre-war structures and adhering to the city's zoning laws and height limits.

The building comprises two blocks that sandwich an existing 11-storey tower, and a new courtyard slotted in the middle. The larger of the two volumes fronts the corner of 23rd Street and Lexington Avenue and is detailed with a series of triangular windows that tuck in and out along the corner edge.

"We have conceived a new, dynamic building for the neighbourhood that communicates both history and modernity," said OMA's Shohei Shigematsu, who has headed the firm's New York outpost since 2008.

"The design appropriately responds to and harnesses the energy of the city and duality of the site's urban context – the dynamic intersection of Gramercy Park and Madison Square is expressed by a three-dimensional, prismatic corner that introduces a new identity to the neighbourhood," he added.

The exterior of the smaller block facing 22nd Street comprises an undulating black grid of precast concrete panels punched with rectangular windows. The framing gently zigzags as a reference to the more jagged facade on the other side. 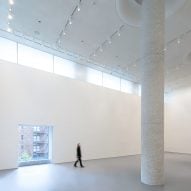 The ground floor of the shorter tower on 22nd Street is the main residential entry and comprises a "funnel-shaped" lobby lined with superwhite travertine.

An enclosed breezeway provides access to a below-grade garden and connects the two towers via the courtyard, which is wrapped by a "ribbon of volumetric balconies". The terraces are clad in aluminium for a lightness that contrasts with the exterior.

Additional outdoor space is provided by a terrace on the second floor that overlooks the courtyard.

Amenities are housed on the lower levels and include a pool, gym lounge, garage, dining room, children's room, screening room and roof terrace.

OMA's New York office revealed plans for the apartment building in 2016, and OMA's founder Rem Koolhaas expressed his excitement about the design and in working in New York in an interview in 2017.

Other projects by OMA in New York include Sotheby's renovated gallery spaces and a colourful staircase for Saks Fifth Avenue. The firm has also recently proposed a pair of towers for Brooklyn's Greenpoint area, which would be OMA's second ground-up project in the city.

Photography is by Laurian Ghinitoiu unless stated otherwise. 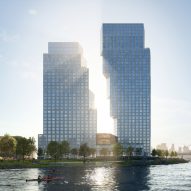