Located beside the Lhomme river in the village of Jemelle, the building was constructed in 1895 and originally used for bottling beer produced by the brewery.

The brewery site has been owned by the family of Jean-Denis Thiry – co-founder of Architecture Cotugno Thiry, with Rita Cotugno – for five generations. The owners decided that the building would be better served as a residential property for rent.

Transforming it from an industrial relic into family home involved stripping the building back to its core structure.

"The only limits were a relatively tight budget, and a request to have three bedrooms to maximise the rental return," Thiry told Dezeen. "We wanted to keep the spirit of the place, as it was built at the time in 1895."

"The idea was to give the project a sense of timelessness, by proposing only a few simple tones and materials. We wanted to highlight the old brick vaults, formerly covered with plaster, and draw attention to the beautiful vegetation and tall trees surrounding the building."

One of the biggest challenges was opening up the ground floor, which had been divided into small rooms by a series of partitions added after the original construction.

Another was restoring key parts of the structure, including the steel beams on each floor that had corroded with time and an area of the building that had been poorly reconstructed after being partially bombed during the second world war.

Six original windows on the north facade had wooden lintels that had rotted away. These were replaced with steel beams, while areas of the walls were completely rebuilt.

"The interior divisions and annexes – which were added later on – were completely demolished in order to recover the original building," said the architects.

"Only three exterior walls, as well as the brick-vaulted flooring and steel beams were preserved. But the building's state of dilapidation made it necessary to reinforce them heavily."

The ground floor, which had been a particularly dark space, is now occupied by a long, open space that functions as a kitchen, dining area and living room, with storage and a bathroom along one side. The first floor contains three bedrooms, a bathroom and a laundry room, while the attic can be used for further storage.

The kitchen, storage and building facilities on the ground floor are contained in an 11-metre-long structure of dark MDF panels that runs along the south side of the space and wraps around the the new staircase.

"The vertical rhythm of the black MDF panels in the kitchen is designed to match the rhythm of the steel beams," said Thiry. "The very damaged brick vaults were painted white to increase the level of lighting in the space." 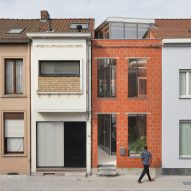 "The idea was also to recall the industrial character of the place. Stainless steel was used in the machinery, and the old cement paving stones were recovered from the brewery."

Floors are coated with a grey polyurethane resin, while the new windows are framed in black-coated aluminium.

The south facade overlooks a neighbouring property, so the architects added new openings to the west, including a wall of glazing at the end of the kitchen area that opens out to the garden beyond. Smaller windows were added in the gables in the upstairs bathroom and facing the staircase.

The architects also created a new entryway to the building from the nearby Rue du Congo, which provides the main access point to the site.

Other recent renovation projects in Belgium have also sought to combine historic features with contemporary additions.

Examples include a B&B in Ghent by Atelier Janda Vanderghote, which also features a central piece of coloured furniture that wraps around the staircase and draws the project together, and Bovenbouw's conversion of three historic buildings in Antwerp into apartments.

Photography is by Johnny Umans.