Concrete forms and outdoor passageways define this waterfront dwelling in the Turks and Caicos islands, which was designed by US studio Rick Joy Architects to embrace the natural landscape.

The project called Le Cabanon is located in the southwest part of Providenciales, an island in the Turks and Caicos archipelago.

"On approach from the adjacent road, the multipartite complex appears to organically grow out of the site's natural coastline, its subtly textured eggshell concrete contrasting the bright turquoise water in the same way as the white sand that lines the shallow inlet," said Rick Joy Architects, which is based in Tucson, Arizona.

Stretched across the waterfront site, the low-slung home consists of distinct concrete volumes separated by open-air passages, which allow coastal breezes to pass through the complex while also acting as framing devices.

"From the corridors, the concrete walls create shallow view-angles that reveal glimpses of each subsequent space and simultaneously frame the sky above," said the team.

Private functions are found in the front of the home, while the gathering areas are situated in the rear overlooking the water. Sometimes fishermen pull up to property's wooden docks, "offering the day's catch", the team described.

The front portion of the dwelling consists of a long, slender bar with a flat roof. Punctured with only a few tiny windows, the street-facing elevation blocks out movement and noise.

"The strategy works," said the studio. "From the interior, the spaces feel secluded and protected, and the ocean views from the kitchen pavilion seem entirely exclusive."

In the rear, a pavilion-like block houses an open-plan kitchen, living room and dining area. Rectangular in plan, this area is topped with an asymmetric single-hip roof sheathed in wooden shingles. An aperture in the roof assists with ventilation and cooling.

The pavilion has retractable glass walls that help eliminate the division between inside and out. On the northwest side, the room connects to a sheltered patio, a generous terrace and a narrow swimming pool.

"Just outside, a shallow pool cuts a line between the sand and the adjoining terrace, bringing the expanse of ocean water ever closer to the living spaces," said the team.

Inside, the home features rooms with concrete walls and flooring, and minimal decor. In one bedroom, dark wood was used for the ceiling and for a built-in storage unit and desk. 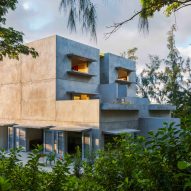 "Mahogany doors, windows and ceilings capture the warmth of the surroundings," said the team. "Natural linen curtains billow in the ocean breeze and let through just the right amount of sunlight."

Sustainability was a concern for the design team. The home was constructed by local builders and entailed the use of local materials, including sand, which minimised the need for imported labour and materials.

"In a similar resource-conscious spirit, the architects placed a large cistern beneath the main terrace to harvest water and topped the flat sections of the roof with photovoltaic panels," said the team.

Other projects in the Caribbean islands include an off-the-grid guesthouse designed by architect John Hix, which features six apartments stacked in pairs of rectangular concrete blocks.