London-based photographer Joanne Underhill has attempted to save Welbeck Street car park in a "small way" with a new series of colour photos.

Underhill first captured the London building in 2013, for a photography project called Beautiful Brutalism, but was motivated to document it more throughly after discovering it was due to be torn down and replaced by a hotel.

"When I found out the numerous attempts to save it failed I felt really disheartened, sad and pretty helpless," Underhill told Dezeen.

"As an architectural photographer the only, and small way, I could save it was in photographs."

Welbeck Street car park was designed by Michael Blampied & Partners and built in 1971, to serve a central London department store.

Underhill's photographs showcase the building's distinctive facade, made of tessellated modules of concrete. It was this facade that helped the building become a landmark for lovers of brutalist architecture.

Despite a preservation campaign, the facade will be demolished imminently, along with the rest of the building.

"If more buildings are going to disappear then photography becomes a really important way of capturing them," said Underhill.

"We view a lot of architecture through images, it's a way of 'visiting' the building if you are unable to physically go there,"  she added. "If the building no longer exists then looking at photographs is the only way it can be viewed."

Underhill has been documenting Welbeck Street car park inside and out for a year and a half, shooting on a Nikon D1 camera, then a Nikon D850 with shift lens.

She uses a tripod in her work, a method she says helps slow her down to really focus on the architecture.

"Unfortunately it hasn't been very well maintained over the years but I found a beauty in that and didn't want to shy away from showing it," she said.

The unusual facade, the decaying interior and the original signs left in place all provided interesting details for her compositions.

"After exploring and photographing it a few times I found the light really interesting and became fascinated with the shadows formed by the exterior geometry when shooting the interior on a sunny day," Underhill said.

In the summer, the photographer also shot on a Sun600 Polaroid camera.

"I wanted a physical reminder of Welbeck, a photograph I could hold as well as the digital images," she added.

The demolition of Welbeck Street was finally confirmed in February 2019 and began in May, prompting architects to mourn its loss. Underhill has been documenting the process, since it was first boarded up in July 2018. 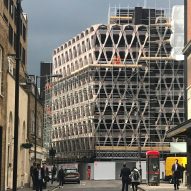 "I've documented the scaffolding that has been creeping up the facade and now it is completely covered I feel that is a symbolic point to end the project," she explained.

The photographer claims the loss of Welbeck Street car park raises a lot of questions for the UK about its attitude to its postwar architecture.

With climate change becoming an increasingly urgent issue, she believes we should think more carefully about knocking down concrete buildings that are less than 50 years old.

"For me Welbeck is totally innovative and a unique piece of architecture that will be sorely missed. Its design lifts it from a car park to an iconic building that should be celebrated and cared for. I love that the design is undiluted and shows off its brutalist roots beautifully," said Underhill.

"I would have loved to have seen it repurposed," she continued. "A bar on the roof, similar to Frank's in Peckham, would have been fantastic and then maybe studio and office spaces, or even an art gallery."

"Brutalism as a whole produces debate and discord which I think is really important to explore. We need to be having conversations around which buildings should be saved or repurposed rather than just demolished," added the photographer.

"I feel this era of architecture is fascinating and more needs to be done to stop some wonderful buildings from disappearing. Many of these buildings are only 50 years old or so, which is no time at all."

"They haven't had enough of a life to warrant demolition."