Laminated wood and concrete will form the hybrid structural system of the high-rise Canada's Earth Tower that global firm Perkins+Will has unveiled for British Columbia.

The project, called Canada's Earth Tower, is planned for a 1.3-acre (0.5-hectare) property along Eighth Avenue near Vancouver's Burrard Slopes neighbourhood. The site is currently occupied by a nondescript, four-storey building dating to the late 1970s.

Set to rise approximately 120 metres, the building will be "the world's tallest hybrid wood tower", according to Perkins + Will, an 84-year-old practice with offices around the globe, including Vancouver. The developer is local firm Delta Land Development.

Construction is currently underway on another hybrid timber tower in Vancouver, Terrace House by Japanese architect Shigeru Ban, which also has claimed to be the tallest hybrid structure in the world. Ban's residential building will measure 71 metres at its upper tip.

Encompassing 31,587 square metres, Canada's Earth Tower will contain approximately 200 apartments, along with shops, restaurants and office space. The mixed-use building will have 35 to 40 storeys, with an exact number yet to be determined.

The massing consists of a tower that rises up from a U-shaped podium. The podium wraps an entry courtyard with plants, trees and seating. One rendering shows a portion of the podium carved away to form a large, sheltered passage with foliage and rocks.

The building's structural system will employ a hybrid approach in order to reduce greenhouse gas emissions.

Concrete will be used for the foundation and core. For the walls, floor slabs and columns, the team will use a mix of cross-laminated timber, glulam timber and dowel-laminated timber – all types of engineered wood.

Within the building, wood will be on full display. One image shows an office with a vaulted, diagrid ceiling composed of timber beams. Another image presents the interior of an apartment, with light-toned wood covering the walls, ceiling and floors.

On the south face of the building, the team has incorporated communal gardens at every third floor, where residents can connect with each other while taking in sunlight and fresh air. Part of the project's goal is to "support community and dramatically improve livability in tall, urban residential buildings".

Aiming for Passive House certification, the building has a number of features that will help reduce energy consumption, such as triple-glazed windows, a heat-recovery system, and natural lighting and ventilation. Moreover, integrated photovoltaics will generate roughly 25 per cent of the building's needed electricity. 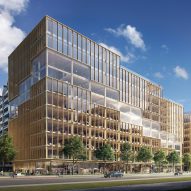 "Canada's Earth Tower will be a zero-emissions building," the team said. "The building will not consume fossil fuels, such as natural gas, in operation."

The team aims to aggressively reduce greenhouse gas emissions during every stage of the project, from construction to operation. The project is part of a zero-carbon pilot programme launched by the Canada Green Building Council.

The site's ample outdoor space will be designed in collaboration with Canadian landscape architect Cornelia Hahn Oberlander. The goal is to restore local biodiversity and provide public areas that are vibrant and accessible.

"Creating meaningful connections to our natural environment throughout the building is a defining characteristic of the design," the team said.

From its mass-timber construction to its energy-reducing strategies, the building is meant to demonstrate that "dramatically higher environmental standards" are possible.

"This visionary project will advance a comprehensive set of environmental goals in an unprecedented way," the team said.

Several designs for tall or mid-rise buildings made of structural timber have emerged in recent years, leading architects to call this period the "the beginning of the timber age".

Others include the seven-storey T3 building in Minneapolis designed by Michael Green Architecture, which features floor slabs, columns and beams made of trees killed by mountain pine beetles. In Toronto, Danish firm 3XN has proposed a pair of 10-storey buildings made entirely of mass timber.