The Stedelijk Museum Amsterdam has named Dutch curator Rein Wolfs as its new director, following the departure of Beatrix Ruf.

Wolfs will leave his current position at the Bundeskunsthalle in Bonn, Germany, to join the prestigious art and design museum on 1 December.

Until then, the Stedelijk will continue to be led by interim director Jan Willem Sieburgh, who was appointed after Ruf resigned amid accusations of conflicts of interest.

Wolf impressed the museum board with his six-year stint at the Bundeskunsthalle, which saw him overcome a period of difficulty for the institution and help make it one of Germany's most visited museums.

He was behind a number of major exhibitions, including shows with Marina Abramović and Katharina Sieverding, as well as the first retrospective of fashion designer Karl Lagerfeld.

Other positions he has held include artistic director of the Kunsthalle Fridericianum in Kassel, Germany, head of exhibitions at the Museum Boijmans Van Beuningen in Rotterdam, the Netherlands and founding director of the Migros Museum für Gegenwartskunst in Zürich, Switzerland.

He also curated the Dutch Pavilion at the Venice Architecture Biennale in 2003.

"We are delighted that Rein will be joining the Stedelijk," said Truze Lodder, chair of the supervisory board.

"As a director, he embodies the qualities the Stedelijk Museum seeks: a deep knowledge of art and, in a broad sense, administrative experience, international charisma, a worldwide network, excellent relationships with artists, an exciting artistic vision, and openness to ideas from staff and collaborative partners."

Funding "independent of outside interests"

Ruf left the Stedelijk in 2017 after Dutch publication NRC ran a story accusing her of conflicts of interest, it was reported by Art News.

The unsubstantiated allegations suggested she had deliberately failed to disclose details about a donation that benefitted other galleries she was affiliated with. It also questioned her role at the advisory firm Currentmatters, whose profits weren't included in the Stedelijk's annual report. 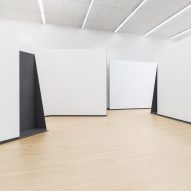 Lodder suggested that, with the appointment of Wolfs, the museum will be paying closer attention to its funding sources going forward.

"Rein has a distinguished record of fostering connections and collaborations, and recognises the need for public-private financing that is independent of outside interests," said Lodder.

"Inclusion and diversity are high on his agenda, as shown by his tenure at the Bundeskunsthalle in Germany. We're looking forward to the energetic and inspiring leadership of our new director."

"I grew up with the Stedelijk Museum Amsterdam and I hope to provide the guidance and support needed to lead this museum, with its revolutionary history and fantastic collection, into the future," he said.

"The Stedelijk is a bold public institute that can become even more diverse, human, and international, and play a vital role in social debate."

The museum also plans to appoint a managing director to work alongside Wolfs.