Mozhao Architects has added a furniture shop and tea house to a technology park in Shenzhen, in a series of six concrete blocks.

Living Art Pavilion was commissioned as part of an effort to increase the cultural offering and public outdoor spaces in the Quanzhi Technology innovation park in Shajing.

The pavilion sits between a main road to the north and a small row of trees to the south. Its irregular form was generated by a desire to create a connection with these trees while minimising sound from the road.

The furniture shop occupies four blocks and the tea house two, with the middle two blocks merging to create a large indoor space that provides an exhibition space for the shop.

Jagged floor plans for each block create pockets of enclosed space, forming courtyards to the rear and small gardens at the front.

Full-height windows on both the north and south sides of the building provide views straight through to these green spaces.

A solid wall separates the tea house from the furniture shop. On either side the blocks, which appear distinct from the outside, blend into larger spaces that lead directly into one another.

"The pavilion, together with the commercial and artistic spaces on the ground floor of an adjacent office, creates a dynamic recreational space," said the architecture studio.

"A comfortable and pleasant public space for pedestrians is created due to the interfaces and scales of these buildings interacting with each other."

Unfinished concrete beams running from east to west emphasise the sloping rooflines inside the building, where white walls and thin black window frames provide a plain backdrop for the trees outside. 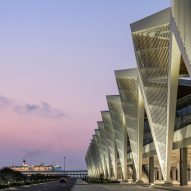 "With the changes in height and sloping beams, the trees appear indistinctly," said the studio. "Under these trees, the plain white walls and grey concrete complement each other, integrating nature as well."

Mozhao Architects is led by architect Zeng Guansheng. The practice recently also completed a new cruise terminal in Qingdao, with an angular, folded roof structure informed by the sails of boats.

Photography is by Chao Zhang.