Shiny tiles gently curve across the ceiling of this bar that Mexican studio Esrawe Studio has completed at one of the country's largest entertainment venues.

The drinking spot is tucked under a grand staircase at the Auditorio Nacional – or National Auditorium – a postmodern building on Mexico City's Paseo de la Reforma.

The structure was completed in 1952 by architects Fernando Peña Ingenieros Óscar de Buen and Guillermo Salazar Polanco, then later remodelled by Teodoro González de León – who also designed the brutalist Museo Tamayo nearby.

"The Auditorio Nacional is recognised as the most important venue for the entertainment industry in Mexico," said Esrawe in a project description. "[It] stands out among the three best forums in the world of its kind, and is a reference and a must for national and foreign artists." 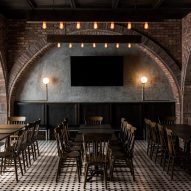 The studio designed the bar to highlight the "iconic character" of the space, including features like the arched ceiling that spans end to end.

This was covered entirely with thin ceramic tiles coated in a copper-toned enamel, which reflect the atmospheric lighting used sparingly around the room.

The bar itself runs the length of the space on one side, where a series of brass countertops are placed on a striated concrete plinth.

Behind, shelves for storing and displaying liquor bottles and glassware are formed by highly polished brass. The feature provides "another element of contrast and luminosity within a space of dark and neutral tones", Esware said.

Lighting is installed in the shelving recesses, as well as along the base of the bar and in thin strips along the ceiling. Dark walls and floor tiles add to the moody atmosphere, and allow the light features to stand out.

The building's existing architectural features are also incorporated into the design. "Two large circular columns that support the staircase are integrated and reflect the rough expression present in the materiality of the enclosure," said Esrawe.

The studio was founded in 2003 by architect and designer Hector Esrawe, whose extensive portfolio ranges from collectible furniture to perfume bottles.