Brazilian firm Studio MK27 has renovated and enlarged a house designed by its founding partner in the early 2000s, which features white surfaces and huge windows that open to the garden.

The project, called Gama Issa V2.0 house, entailed adding a new rectilinear volume to a two-storey dwelling that was completed in 2001 in São Paulo. The original home was designed by architect Marcio Kogan, who started an eponymous practice in the 1970s and renamed his firm Studio MK27 in 2001.

Totalling 700 square metres, the home features white surfaces, formal compositions, and a strong relationship between interior and exterior. The project garnered international attention and was nominated for a World Architecture Award in 2002.

The owners are a married couple with two teenage daughters. The wife is an art director, and the husband works in advertising. Wanting to enlarge their home, the clients purchased an adjoining lot to make way for an expansion.

"The family wanted more space because the original house was not that large," said the design team. "Both of the owners work there, so they wanted a more comfortable space."

L-shaped in plan, the two-storey addition was placed on the south side of the home, and is organised around a central axis and courtyard. Facades are clad in accoya wood, distinguishing them from the existing white concrete walls.

The addition has increased the home's built area by 50 per cent. The lower level encompasses a studio, staff living quarters, a laundry room and storage space. The upper level contains bedrooms and a mezzanine with a lounge area. The storeys are connected by a new grey spiral staircase, along with a stair in the original dwelling.

Various updates were made to existing spaces, including new decor and grey wooden flooring. A centrepiece of the home is a double-height living room with sliding glass doors that span 17 metres, enabling the space to merge with a garden. 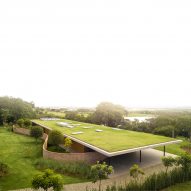 The team replaced the original doors with single panes of glass, which "was impossible to do at the time of original construction".

The living room also has a monumental bookshelf that stretches along one wall, on both the ground floor and upper level. The shelving is part of the home's original design and was left intact.

"The bookcase serves as cladding for the longitudinal wall of the living room and configures, also, a visual interruption for two symmetric staircases," the architect said.

Overall, the project gave Kogan the chance to update a dwelling he created nearly 20 years ago, in the early days of Studio MK27.

"The project followed the same concept/guiding line as the original, and we envisioned this expansion and renovation project as an opportunity to upgrade the house, bringing the Gama Issa home to what it would be if it were conceived today," the team said.

Studio MK27 has an extensive portfolio of projects in Brazil and beyond. Recent work by the studio includes an austere pavilion for furniture retailer Micasa, a minimalist dwelling outside of São Paulo topped with a vast green roof, and a Miami Beach residence with a private lagoon and serpentine bridge. 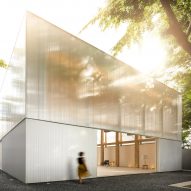