A controversial new airport is not the biggest threat to Peru's Machu Picchu, says the co-founder of leading Peruvian architecture firm Barclay & Crousse.

Construction of Chinchero Airport started two weeks ago on a site overlooking the historic Sacred Valley of the Incas, sparking protests from conservationists.

But Jean Pierre Crousse, co-founder of Lima firm Barclay & Crousse, told Dezeen that the damage is already done and protesters are too late.

"The recent movement against the construction of the airport has valid arguments in abstract terms, but it comes at least four years too late, when the process is practically irreversible," he explained.

"Absence of a holistic vision is far more harmful"

Crousse claims that the UNESCO World Heritage Site – a masterpiece of the Inca Empire, built in the 15th century – has already been reduced to nothing more than a tourist spectacle. He said that a new airport is the least of his worries.

"The museumification process of a living cultural landscape and the consequences of the loss of ancestral knowledge in managing water, agriculture, sustainable production and occupation of the land, as a consequence of profit-guided, short-term decisions, as well as the absence of a holistic vision, is far more harmful than the airport alone, which is only a logic outcome of this misunderstanding," he said.

Chinchero Airport is being built between Cusco town and Incan citadel Machu Picchu. First proposed by the government in the 1970s, it will expand Peru's current facility at Cusco into an international transport hub.

The airport will offer direct flights from many major cities, increasing the number of international visitors from five to eight million per year.

Opportunity for "harmonious and sustainable" approach

Crousse sees the project, not as a problem, but as an opportunity for the government to take greater steps to preserve the important cultural site.

"I think we must demand the government to take serious actions not only to minimise the negative effects the airport will certainly bring, but to rethink the way we envision the so-called development," he told Dezeen. 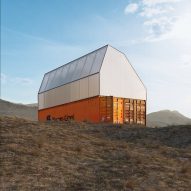 "The airport controversy opens up a great opportunity to figure out how can we continue to transform the landscape in a harmonious and sustainable way, because it will not be the last threat to this land," he added.

The architect wants the government to do more to mitigate the effects of tourists in and around the Sacred Valley, but also to pay greater attention to the impact of all large-scale development in the region.

"The concerns about building modern infrastructure in an ancestral cultural landscape, characterised by an extensive ancient occupation of the land, are not only circumscribed to this airport, but many other large-scale projects like hydroelectric plants, mining, routes, etc," he said.

"The environmental threats to an incredibly rich cultural and historical landscape as the Peruvian Andes are multiple, and a holistic approach is essential to minimise negative impacts of these otherwise needed development projects," he continued.

"Unfortunately this is not the case for the airport nor for so many other planned and executed projects in Peru."

Crousse runs the architecture firm Barclay & Crousse with partner Sandra Barclay. The pair, who are both Peruvian natives, set up their studio in Paris in 1996, before relocating to Lima in 2006.

The online petition against Chinchero Airport was started by Peruvian art historian Natalia Majluf. She claims the transport hub "endangers the conservation of one of the most important historical and archaeological sites in the world".

At the time of publishing, the petition had over 50,000 signatories.