Nicholas Grimshaw has stepped down as chair of Grimshaw, the architecture firm he founded almost 40 years ago, to dedicate his time to a new foundation.

The 79-year-old British architect, who won the RIBA Royal Gold Medal in 2019, will remain in an advisory role and will devote much of his time to the new Grimshaw Arts and Architecture Foundation.

Andrew Whalley, currently principal architect at Grimshaw, will take over from Grimshaw as chair of the company.

Grimshaw, who was one of the leading pioneers of the high-tech style, said he wanted to use his 50 years of experience to help young people enter the industry, and promote diversity and sustainability.

"It's going to be one of my chief interests," he told Dezeen.

"I've seen the lack of support, and the lack of acknowledgement for what architects can do," he said. "The government has decided that the creative industries are a major way of supporting this country, but there isn't the training across the whole field."

Grimshaw is considered one of the leading pioneers of high-tech, an architectural style that emphasised and celebrated engineered building elements such as ducts, lift shafts and tubular steel.

Grimshaw helped define and popularise the style along with fellow British architects Norman Foster, Richard Rogers, Terry Farrell, and Michael and Patty Hopkins. In 2014 the group were celebrated in a BBC series called The Brits who Built the Modern World.

Educated at the Edinburgh College of Art and the Architectural Association in London, Grimshaw worked in a partnership with Farrell for 15 years after he graduated, before establishing his own architecture practice in 1980.

His most significant works include the Eden Project, a huge indoor garden housed in two ETFE-clad biomes in a former quarry in Cornwall, England; the snaking 1994 Waterloo International train terminal in London; and the 1988 steel-and-glass Sainsbury's supermarket in Camden, London.

After 39 years leading the practice he will now be handing over to Whalley, who joined Grimshaw just a few years after it was founded.

In his new capacity, Whalley said he aims to mobilise the practice's global network of offices to support the foundation's work, which will be funded by an endowment.

"We had an event in New York with [secretary of state for international trade] Liam Fox, and he was extolling the importance of the creative industries have for the UK internationally, and in particular architecture," said Whalley. 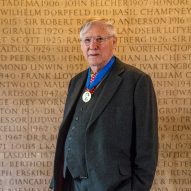 "But [there is] a lack of support in education, particularly in schools," he added. "Time given for art and creative pursuits, music, drama, all those things that help a creative mind flourish are either underfunded or not funded at all."

"If you get into art school, it's almost by by accident, really, that you've managed to survive the system."

The Grimshaw foundation will also fund a series of talks at the RIBA, where artists will speak to architects.

Promoting sustainability will also be a core part of the foundation's work. On receiving his RIBA Royal Gold Medal, Grimshaw laid out his case for redeveloping buildings, which he claimed should never be demolished for environmental reasons.

Whalley, who was unanimously elected as the new chair by the Grimshaw partners, was the lead architect on landmark Grimshaw projects such as Waterloo International, the redevelopment of Paddington Station in London, and the Experimental Media and Performing Arts Centre in New York. He also set up the Grimshaw's New York studio in 2001.

Based in London, architecture studio Grimshaw has offices in Los Angeles, New York, Paris, Dubai, Kuala Lumpur, Melbourne and Sydney, and employs around 600 people. The studio recently rebuilt London Bridge Station and is designing outposts of the Eden Project in China.

The practice is also working on plans to overhaul New York's JFK airport, and is creating a sustainability pavilion for the Dubai 2020 Expo that will be entirely carbon neutral.