Michelin is partnering with General Motors to bring its airless tyre prototype to the roads, potentially saving 200 million punctured car tyres from the scrap heap annually.

The two companies aim to develop Michelin's UPTIS (or Unique Puncture-proof Tire System), which promises to eliminate both the waste and the danger that comes from a flat or blown-out tyre, so that it can be used on the road by 2024.

The tyres feature a complex internal architecture made from carefully engineered materials that remove the need for compressed air to support the vehicle's weight.

They are so tough that Michelin says they will require a "near-zero" level of maintenance. The main benefit is that this will reduce the number of tyres scrapped due to punctures – a number that Michelin estimates at 200 million worldwide annually.

That's not counting the manufacture of spare tyres, which UPTIS would also make redundant.

Michelin announced its research partnership with General Motors (GM) earlier this month at Montreal's Movin'On Summit for sustainable mobility – the same event at which it first unveiled the UPTIS prototype under the name Vision two years ago. 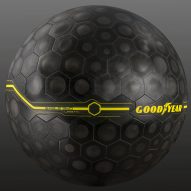 The next step will be to test the prototype on GM's Chevrolet Bolt electric cars. The companies aim to introduce the tyres onto some GM passenger vehicles in 2024.

Michelin is also positioning the technology as a good fit for large fleets of shared vehicles, which it sees as the likely future of mobility.

"The vehicles and fleets of tomorrow – whether autonomous, all-electric, shared service or other applications – will demand near-zero maintenance from the tyre to maximise their operating capabilities," said Michelin.

UPTIS is an evolution of Michelin's current tyre technology, which it calls Tweel – a combination of the words "tyre" and "wheel". With Tweel, a spoke-like internal structure bears some of the vehicle's load. In UPTIS, this architecture can bear all of the load — including at highway speeds.

Materials innovation has also been key. The prototype tyres are made from a composite rubber and high-strength resin-embedded fibreglass.

Michelin is not the only tyre company that is rapidly innovating. Earlier this year, Goodyear showed off an airless concept called Aero, which tilts to turn into a propeller for flying cars. This followed Oxygene — its oxygen-producing moss tyre concept.