Curator Aric Chen has explored how we will use materials in a new geological age, in the headline exhibition for this year's Design Miami/Basel.

Elements: Earth was a group exhibition featuring nine projects relating to the anthropocene – a proposed new age in which humans are the dominant force impacting the earth's geology.

On show at the entrance to the fair, which took place last week in Basel, the show aimed to highlight the "growing inescapability of our impact on the planet".

Together the stands aimed to "make tangible the blurring distinctions between artificial and natural, raw materials and waste, and consumption and production".

The nine projects were all selected by Aric Chen, the Shanghai-based architecture and design curator who last year was announced as the first curatorial director of Design Miami/Basel. The design fair is now in its 14th year.

"The way I see it, the anthropocene is not a topic – it's perhaps the singular, overriding condition that we now inhabit," said Chen.

"Design has always been about how we articulate, and interact with, the constructed world – and we can now safely say that the world itself is, quite literally, a human construct," he continued. 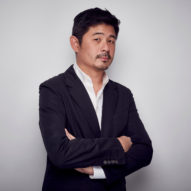 "And to the extent that what we consider to be collectible design is that which engages the pressing attitudes, issues, and concerns of its day, I think Design Miami/Basel is absolutely the right place to be bringing up these questions. In fact, there's no wrong place to do so."

Chen chose projects that would pose questions about how we might use materials in future on an overcrowded planet with depleted resources.

"My initial focus was on work, rooted in research, that prompted new ways of looking at, and thinking about, materials, resources, and production in the context of a changing planet," explained Chen to Dezeen.

"I should stress that the show was never about solving an environmental crisis that is too complex, and at this point too far gone, to be 'solved.' We need to change what we can change, but there are also things that are by now irreversible and that require us to rethink even what 'solving' means."

Chen had designers and projects in mind from the outset and "gently nudged" them and their galleries to take part. He also issued an open call to all the fair's galleries and drew further selections from those entries.

"That was interesting for me, as it prompted me to expand my own thinking a bit and draw connections I may not have drawn on my own," he said.

Comprising nearly 25 works, Branzi's contribution was the largest ever collection of the Italian architect and theorist's work to be presented together. It is the result of four decades of research into the relationship between humans, societies and constructed landscapes.

French architect Odile Decq showed The Black Pavilion, a black one-way-mirrored glass structure. It was continuously transformed by collaged light sculptures by Patrick Rimoux, which were projected onto its surface.

Shahar Livne teamed up with Galerie Vivid to show her project Metamorphism, which that seeks to mimic the earth's geological processes to create a material with a plastic content.

"Some projects are more speculative and research-based, others are more evocative, expressive, or even visceral and atmospheric," said Chen.

"There's a plurality of voices and approaches, but in the end I think all the projects investigate, in different ways, the blurring lines between the natural and human-made, raw materials and waste, and production and consumption."