The studio headed by James Russell and Hannah Plumb was interested in repurposing materials that are usually discarded when the foundations of existing buildings are uprooted during the demolition process.

This is welded to create compositions that support simple steel and brass candlesticks.

"A large part of the design comes through the demolition process which bends and contorts the steel in completely unplanned ways," Russell told Dezeen. "We keep these shapes just as we find them, and the challenge is to combine the right pieces and arrange them to form a continuous loop."

The catalyst for the project came during a visit to San Francisco in 2016, when the couple came across a group of park benches that had been removed as part of a renovation project. The benches were discarded with their steel and concrete foundations exposed.

During subsequent travel to places such as Berlin and Lebanon, the designers were drawn to ruins and demolition sites.

The tangled forms created by piles of rebar with clumps of concrete still attached prompted a fascination with the naked materiality, which for them held a raw beauty.

The first work in the Steel Roots series was created for a client in New York who commissioned a chandelier to hang above their dining table.

The designers used nine sections of rebar to create a frame supporting individual candles that can be easily added or removed depending on the occasion.

Initially, Russell and Plumb found it difficult to obtain access to demolition sites for health and safety reasons, but eventually they established a relationship with a company that allowed them to harvest the materials.

"For us it was a wonderful and exciting source of material that we played with to make new forms," said Russell. "Today, many demolition firms in the UK do separate the aggregate from the rebar and reuse it, but it's still an under-appreciated resource."

Each chandelier is created from lengths of the twisted metal that are welded together to create an unbroken line.

The steel structure is then suspended from the ceiling using wires connected to a salvaged concrete counterweight and pulley system that can be used to adjust the height.

The studio also developed floor-standing versions using reclaimed concrete lumps as the solid base for an upright loop of reinforcing bar.

The steel candlesticks are designed as delicate, minimal shapes with a brass dish to catch the wax. Simple hooks integrated into the form make it easy to reposition or remove elements.

Each candlestick features a unique counterweight created using a process that was inspired by the original encounter with the upturned benches in San Francisco. 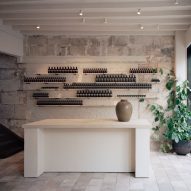 "Planting these candlesticks became almost like a private ritual," Russell suggested. "It's really satisfying to dig these holes and plant something, then unearth it and clean the dirt off to reveal the somewhat random outcome."

Since the creation of the original commissioned chandelier, the project has evolved to include other chandeliers of different sizes, along with floor-standing candelabras and a tabletop version that holds a single candle.

Some of the pieces were created for California's Slete Gallery, while the designers are also able to adapt the process to produce unique pieces to commission.

The studio, which marks ten years since it was founded this year, produces objects including sculptures, furniture and fine art installations, as well as environments for interior projects or events.

Previous projects have included a store interior informed by the local architecture of Bath, England, and a series of hand-sculpted lamps featuring crumpled sheets of lead placed on top of cubed concrete bases.