The all-white rooms of the Annso Hill Hotel in Tengchong City, western China, are covered with a traditional tiled roof, which is broken by a zigzagging entrance.

Studio QI designed the hotel, which is located on a street lined with bed and breakfasts and small shops, to respond to a sloped site that leads up to a dramatic green landscape surrounded by forests. The building follows the slope and is covered by a tradition tiled roof, cut into at its base by a zigzagging entrance.

The roof tiles that form the front of the hotel step 30 metres down the hillside to almost touch the pavement in front.

As they step upwards, these roof sections break away to reveal sections of white wall and glazing, alongside a staircase that leads directly up the hillside.

"This geometry adds a new trajectory that is perpendicular to the linear street connecting the town both visually and spatially with the 'hidden' hill via a sequence of living conditions," explained the architecture studio.

As well as spaces for guests, the hotel has been designed to house a series of spaces that are open to the public, such as a cafe, bar, gallery and yoga area.

"Our approach provides an open space for the public realm that is extremely rare in Heshun, as the public are drawn to any and all creative activities or social programmes," said the architecture studio. 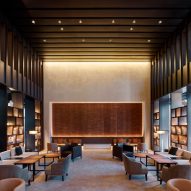 The bedrooms sit behind these public areas at the top of the hill, oriented to each have an unobstructed view over the open landscape.

The all-white interiors of both the communal spaces and bedrooms, down to details such as furniture and bedding, create a stark contrast with the browns and greys visible outside.

A tall arcade runs alongside the bedrooms, directly open to the outside and shaded by the overhang of the roof and the adjacent forest.

"There is an emphasis on plays of light and shadow through manipulating the geometrical relationship between walls and windows," said the studio.

Viewed from the other side, the hotel peeks up above the town with a stepped series of rooflines reminiscent of the older surrounding structures, but marked out by their full-height glazing and white walls.

Several practices have turned to China's rural landscapes as the dramatic setting for retreats and hotels. In Guizhou Provence, ZJJZ Atelier created a hotel consisting of ten individual wooden cabins, which sit perched on a hillside surrounded by forests.