Bayhouse is a three-bedroom home by Studio Rick Joy on the northeast seaboard of the US.

Based in Tucson, Arizona, the firm designed the house on a beachfront property with a massive roof,  featuring an irregular pitch and soaring ceilings inside. It is covered with slate roof tiles to reference the vernacular architecture of New England, and topped by two square lightwells.

"Atop the house's stone volume, a slate shingle roof – mathematically designed so as to be utterly without pattern – appears deceptively light as it leans toward the water, almost as if the form were created by a strong gust of wind, its steep profile easily shedding snow and rain," said the studio.

The home is constructed with a solid white granite exterior. When paired with the dramatic roof, it gives a weightiness to the building that contrasts with the precariously sandy, flood-prone site.

The main living spaces including the kitchen and living room are arranged to overlook the water, with sliding glass placed to open onto a patio. Another screened-in porch adds additional outdoor space.

A cedar-lined carport is tucked on the far side of the house, away from the waterfront.

Inside, the high ceilings are lined in Douglas Fir boards. The warmth of this wood is continued with pale wood chairs, cabinets, floors and seating upholstered in creamy hues.

At the middle of the home's main living space is a large stone fireplace and chimney that stretches to the highest peak of the pitched ceiling. It is covered in the same stone as the building's exterior, and divides the kitchen and lounge.

Three bedrooms are accessed by long corridors at the far end of the home, towards the northeast side of the property. Each features closets and en-suite bathrooms.

The point where these corridors meet is a gallery space for displaying the client's collection of photographs.

Outdoor steps are nestled between two of the bedrooms and lead down to the waterfront. An exercise room, bathroom, storage areas and a foyer complete the property.

Bayhouse is in New England, a northeast region of the US that gets its name from when English Puritans and colonists first settled the area, in the 1600s. The area comprises six states: Massachusetts, Maine, New Hampshire, Rhode Island, Connecticut and Vermont. 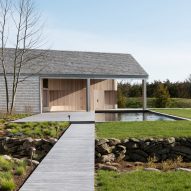 Examples of more traditional homes in the area include a renovated house by Maryann Thompson and a split-residence by Leroy Street Studio.

In addition to Bayhouse, other projects by Studio Rick Joy, formerly Rick Joy Architects, are a low-slung house in the Carribean and a Princeton train station, both of which feature angular rooflines.

Photography is by Jeff Goldberg of Esto.