Maitenes House is located in central Chile's Llanquihue Province, near the coastal town of Puerto Montt. Situated at the northern edge of Patagonia, the area is known for its large lake and four volcanoes, along with its strong winds and long rainy season.

The difficult climate inspires "a way to build and inhabit tied to the idea of shelter and protection", said Ignacio Correa, who runs an eponymous studio in Santiago.

The siting and orientation of the two-storey home was based on the topography and path of the sun, along with a desire to provide expansive vistas.

"This is how we decided the orientation and location for the project, which starts by taking height from a hill of Maitenes to face the east – toward a view of Lake Llanquihue and Calbuco Volcano," the team said.

The home consists of a long volume that is slightly bent. The angulation of the volume assists in blocking winter rains, while facilitating cross ventilation during warmer months. The kink also helps optimise how sunlight interacts with the home.

The home has two different types of facade treatments. The lower level is wrapped in glass, with pine and cypress structural elements left visible. High-performance glazing was used to help with energy efficiency.

In contrast to the transparent lower level, the upper portion is wrapped in dark corrugated metal – a material that can withstand high exposure to wind and rain. Various sized windows bring in light and fresh air. 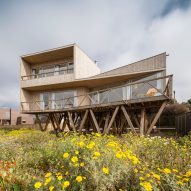 The home encompasses 300 square metres, with a clear division between public and private realms. Common and service areas were placed on the ground level. To the west, the interior space opens onto a patio shielded by a small slope and pre-existing trees. The eastern portion delivers sweeping views of the rolling valley and distant mountains.

A wooden staircase leads to the upper level, where the team located a master suite and two bedrooms. At one end, a large cutout in the facade adds visual interest while providing unencumbered views of the terrain.

Ignacio Correa has completed a number of homes in Chile, including a coastal dwelling on stilts overlooking the Pacific Ocean and a long, wooden residence for a family of farmers.

Photography is by Aryeh Kornfeld.