The block, which contains 13 apartments, has been built close to the centre of Madrid between two distinct areas. To the north, the main facade faces a busy road and a series of industrial buildings, and to the south, balconies now overlook a quiet garden space and pool.

"Regulations restricted the building to a 12 metres depth, which allowed for an area occupied by a garden and pool, something not very common in the neighbourhood that gave a unique quality to these developments," explained FRPO.

The district, previously occupied primarily by industrial buildings and workshops, is rapidly being transformed into housing, and the studio sought to reference this history with their design for the new housing block.

The north facade was built using prefabricated glass reinforced concrete panels, which can be rotated to reveal the aligned windows behind, allowing light into the interiors while simultaneously providing sun-shading. 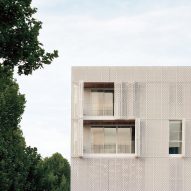 The quieter southern facade was assembled from prefabricated metal frame elements, creating a grid of small balconies that can be closed-off from direct sunlight using the external roller-blind sunshades.

At the block's lower levels, deep, yellow-lined cuts have been made through the form that draw light into the communal access areas and two levels of underground parking.

"The volume is drilled with two double and triple height gaps adjusting the maximum built surface: a car and pedestrian passage resembling the old industrial constructions in the area, and a void in the facade that allows the natural ventilation of the garage," said the architecture studio.

Where these areas have been hollowed out of the building's sections, apartments have been pushed back to face the internal courtyard rather than the street.

"The space is fluid, connecting corridors and kitchens with living areas through large sliding doors,"  the studio continued.

FRPO was founded in 2008 by Fernando Rodriguez and Pablo Oriel. Previous projects include a concrete pool pavilion in a forest on the outskirts of Madrid, and MO House, a home in a forest split into different forms clustered around the trees.

Photography is by Imagen Subliminal.