It's only possible to create ethical fashion if you pay attention to all elements of the business says Amy Powney, creative director of the fashion brand, which is collaborating with Net-A-Porter to make clothes from cruelty-free silk.

Mother of Pearl has aimed to address all elements of the business to make it as sustainable as possible.

"I don't feel like you can say you're interested in sustainability if you're not thinking about the full picture," Powney told Dezeen. "It's really important for me that we don't just say, 'here's a piece of recycled polyester and now we're sustainable'."

"It's a mindset. You have to completely change the way you think about everything. It becomes a filtration process in your brain."

The nine peace silk items are sold exclusively through online fashion retailer Net-A-Porter, which chose to work with Mother of Pearl because of the brand's stated commitment to creating a more sustainable industry.

The companies chose peace silk – also know as ahimsa silk – because it is an alternative to silk that is produced without harming silk worms. Rather than boiling the pupa in their cocoons, they are left to hatch before the threads are turned into silk.

The brand also digitally printed the fabric, using the exact amount of ink needed rather than the huge amounts of excess water and ink required for traditional printing methods.

Although Mother of Pearl has comprehensively worked through all aspects of the supply chain to create the range, according to Powney this has not been hard work.

The east London-based brand has a comprehensive sustainability policy on its website, covering the environment, transparency, animal welfare and social responsibility.

Specific policies include supply chains that are traceable "from field to final", limiting the number of countries that garments have travelled between to two, and working with mills that are committed to reducing water consumption.

A member of the team visits its factories in Portugal each production cycle to ensure that staff welfare is prioritised.

Eight to 10 per cent of greenhouse gases caused by fashion

Powney believes that changing the fashion industry starts with educating designers and consumers.

"You just learn and you teach yourself," Powney told Dezeen. "It's an education thing. I don't think it's that hard."

As part of the collaboration with Net-A-Porter, Mother of Pearl also made a film with BBC Earth to educate people on the polluting effects of the fashion industry.

According to the UN, the fashion industry is the second most polluting industry on the planet and responsible for between eight and 10 per cent of the world's greenhouse gases, something that Powney believes the average customer isn't aware of.

"I just thought, I don't want to make more stuff for no reason," explained Powney. "So let's use it as a brilliant opportunity, if we're going to make products, to tell the consumers why we're doing it."

"I think the piece of information that the fashion industry is very, very responsible for climate change is brand new information not just for the consumer, but for a lot of designers," she added. "There's just a massive disconnect."

"It has to be about social responsibility"

Mother of Pearl uses organic cotton, wool and silk that is Global Organic Textile Standard-certified. They only buy wool from sheep that are not mulesed, a process of removing sheep's skin without anaesthetic.

They have also reduced fabric waste in production by making their pattern-cutting tighter.

"It has to be about social responsibility, animal welfare, carbon footprint, quantity of travel, best practice fabrics, what's its lifespan? where's it going to go?" said Powney.

"If you're using this fabric what does that mean, at growing stage, at spinning stage, at weaving stage? Once it's in a garment what's its lifespan? Where's it going to end up afterwards?"

Powney "just got on Google" and began a process of internet research, initially to discover more about organic cotton-growing economies.

She discovered that there were a huge number of steps before raw materials got to agents. The brand decided to bypass the agents and go direct to source to try and piece the puzzle together.

The supply chain includes farmers, cotton pickers, weavers, spinners, scourers and finishers at a bare minimum. The brand has traced every step over a three year period. 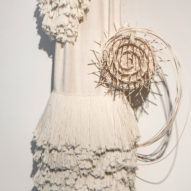 "We all have access to the internet, everything is on there, the good and the bad," said Powney.

"You just start trying to work it all out, then you start meeting companies and suppliers and the more you dig, often some suppliers do know what's going on, it's just that no-one's ever asked them those questions before."

The whole team worked as "investigators and diggers and researchers" until they found the information they needed.

"We need to get out of markdown culture"

The brand has discovered that, by working with vertically integrated companies – that are in charge of multiple elements of production – they were able to make clothes that are cheaper, as well as more sustainable.

Powney launched a core collection of the best-selling Mother of Pearl pieces, called No Frills, last year as a "learning curve" to test the new working practices.

Powney suggests that high-street retailers should dedicate half their stores to core basics, with additional saleable seasonal pieces, a model that Mother of Pearl follows.

"You can't get away from the fact that you are going to have stock at the end of the season. So we do need to shift it as I don't want to burn it, but I need to protect the brand," said Powney.

"So I just make sure all those iconic pieces aren't in markdown basically."

Fashion and designers are increasing trying to find ways to be both more ethical and more sustainable and according to Powney, the fashion industry has reacted positively to the brand's stance.

"I think for the designers and makers, they're the ones that are probably more stressed out about everything, because we've proven that you can do it, which is both inspiring and scares people," she said.

"There are easy things you can do tomorrow. We are living proof that any brand can absolutely change their supply chain."