Food tech start-up Solar Foods has created a climate-friendly, protein-rich food made from electricity, air and water laced with bacteria.

Developed in collaboration with VTT Technical Research Centre of Finland and the Lappeenranta University of Technology, Solein is made by applying electricity to water to release bubbles of carbon dioxide and hydrogen captured from the air.

Living microbes are added to the liquid – these create protein that is then dried to form a protein-rich powder.

The production model is similar to the fermentation process that is used to make beer. It can be used to produce food "in the desert, arctic or even in space".

According to its makers, Solein is 100 times more climate-friendly than any animal or plant-based alternative, when it comes to water use, land-use efficiency and greenhouse gas emissions.

The company plans to produce enough powder to make two billion meals a year by 2022.

It takes 1,550 times as much water to produce the same amount of beef as of Solein, and production of Solein is ten times more efficient than that of soy in terms of usable protein yield per acre.

It doesn't require land or large quantities of water, both of which are likely to become more scarce in the near future.

"It can be produced anywhere around the world, even in areas where conventional protein production has never been possible."

A 2018 Food and Agriculture Organisation report of the United Nations stated: "What can be produced and whether growing and changing food requirements can be met will depend on the availability and productivity of resources, and notably of land and water."

"These resources are already under pressure, and although technical progress has raised productivity, evidence suggests that productivity growth, or at least growth in crop yields, is slowing," the report continued.

Currently three plants – rice, maize and wheat – contribute nearly 60 per cent of the calories and proteins obtained by humans from plants.

Solein "caters to every imaginable meal"

The Solein protein powder can be used as an ingredient in regular foodstuffs such as yoghurts, shakes, bread and pasta.

Its makers claim that it looks and tastes the same as regular wheat flour, as well as providing the protein source for plant-based meat alternatives. It can also be 3D-printed to give it more texture. 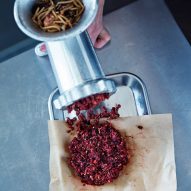 "Solein can be used in a wide variety of food products, and across multiple industries or consumer preferences," said Solar Foods.

"It offers a unified solution that caters to every imaginable meal or diet of today, while also creating opportunities for entirely new foods of tomorrow."

Solar Foods will apply for a novel food license from the EU later this year, with the intention of going into commercial production in 2021.

The start-up is also working with the European Space Agency to supply astronauts on a mission to Mars. They also hope to turn the proteins into a culture medium in which cultured meat could be grown in the future.

IKEA's research agency Space 10 recently produced a cookbook with recipes for foods of the future, including algae hotdogs and burgers made from ground mealworms.